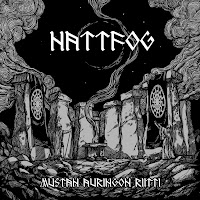 Another Hammer of Hate discovery, Nattfog was born from the rhythm section of the Finnish Norns, whose In Fog They Appear demo (2005) I had previously reviewed for its CD release through the young but promising Voldsom imprint in 2009. Though utterly straightforward and often repetitive, that was still a good showing with a strong sense of immersion, a characteristic which has clearly been passed along to Nattfog. Simplistic guitar passages drudge along in dense, escalating structures of tension through which the carnal rasps continuously stretch and flow, and there's a corpulent sense of sadness and fell glory throughout the duration of the debut which creates a greater whole than its riffs, vocals or musicianship alone might cultivate.

I'm definitely getting a Burzum vibe here, if only for the primal majesty of the chord choices, or the plight of the plucky, ringing synthesizers in instrumental "Kosmisen Usvan Ympäröimänä". But perhaps more prevalent is a Summoning influence. Especially in the intro ("Blinding Fog") or the extensive, martial sorrows of the closer "Kaksitoista Askelta Luvattuun Valtakuntaan". The drum beats to these are fashioned with a tribal, warlike consistency that gives off that same medieval/Middle Earth impression, especially when joined by the droning synthesized horns in the latter. However, the band definitely differs when it comes to the metallic content, or more accurately the thick tone of the chords. The resonant, resilient rasp of the vocals has more in common with Horna's mid period than the suicidal shrieking of Vikernes. When it all gels together with the raw, crashy drumming, streaming Bathory melodies and thick bass lines in the surge that is "Reaching to the Stars", you begin to witness Nattfog at its best...

I would point out, though, that this is far more of an atmospheric experience than one in which the listener will want to pick through the individual details. No individual element of this album would be worth much on its own, and the guitar progressions are unanimously predictable and familiar to those who have been following the genre for a decade or so...not one will ring out in your head repeatedly to the point that you'll feel some subconscious desire to return to it. That's as tangible a weakness here as it would be just about anywhere in the metal spectrum, but Mustan auringon riiti scrapes by on its sum, grisly valor played out at slow to middle pacing. A 43 minute torrent of sorrow and antipathy which accumulates on the listener's conscience like cold rain on a poncho and hat, burying him or her in a formidable tide of antiquated tears.