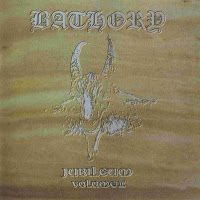 If it's not painfully obvious just how conniving Jubileum Vol. II seems in the long term, just take a brief glance through the track list. You'll find more tracks lifted from the same albums that the first volume outsourced the year before, and other rarities that were held back. Had Boss and Quorthon decided to just release the 4 obscurities there and the three here as a single EP, or perhaps tossed on some other unheard material, it might have felt a lot less cheap. Fuck, if they had just kept it in their pants until the later 90s, they could have combined the unreleased material from all THREE Jubileums to produce a single, comprehensive collection that would have been both mandatory and highly anticipated by their original fans and the many that joined the procession through their individual discoveries through the emergent black metal genre earlier that decade.

Nah, this just feels like an incomplete 'half' to shove on your shelf next to Vol. I and forget all about it. As proof of this, look at how they've included Bathory's OTHER track from the 1984 Scandinavian Metal Attack split, "The Return of Darkness and Evil". Granted, both of their contributions to the release appear elsewhere in the Bathory canon in a form that does not greatly diverge in quality, but I'd rather have these remnants in one place. The other gems here are "Burnin' Leather", a straight black/speed/thrash blitz from before the Blood Fire Death album was released with Quorthon's most Germanic, Mille Petrozza presence perhaps in all his legacy (not only for the voice itself but the syllabic patterns); and "Die in Fire", which was taken from the same 1983 demo recordings as "You Don't Move Me (I Don't Give a Fuck)". The vocals are a little more hacked here, but I still quite enjoy the primal riffing and think that element alone is just another of the myriad reasons Bathory has been such an influential band. Try and count how many of these throwback speed/black bands today owe their very existence to a tune like this...great that we can finally hear it.

But that's where the value ends to this collection. The rest of the tunes are just lifted off the full-length albums. Two more from Twilight of the Gods ("Bond of Blood" and the title track), which seems rather silly. It was their most recent record and yet now we've got 50% and 30 minutes of its content reprinted within 2 years. From the first three albums, there is a small contingent including "Possessed", "Raise the Dead", "Total Destruction" and "Call from the Grave", and then more of their Viking fare in the form of "Shores in Flames" (Hammerheart) and "The Golden Walls of Heaven" (Blood Fire Death). So, yes, now 5 of the 9 tracks from Blood Fire Death are also repressed for these two compilations...if anyone is THAT interested, why not just buy the damned thing and experience its full, consistent glory.

Alas, the same frustrations apply here to this release as they do for every other largely needless printing of plastics and paper that I've experienced, and it's difficult to regard Jubileum Vol. II as anything more than an incomplete commercial venture targeted at collectors and fanatics who will purchase this on its logo/brand name alone. Two of the unreleased tracks are worth hearing, as they'd not been available to those who bought the original pressings of the full-lengths. But the remainder of the content does not flow any better here than it did in its original configuration, and to most of good taste, Bathory's a good enough band to drop the 60-80 bucks on their exceptional backlog anyway. As it stands, the net worth of this particular collection is about as long as it takes to rip "Burnin' Leather" and "Die in Fire" to your portable mp3 player or desktop folder and then sell it off to some other sucker.