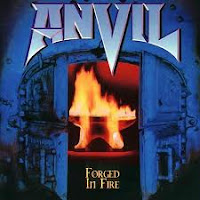 It's often the case that a band seeing a brief and sudden splash of success will attempt to closely emulate that success, if not note for note than at the very least aesthetically. Metal on Metal was likely not a commercial breakthrough on anyone's scale, but clearly that leading single was far more resonant than anything off the debut album, so it makes sense that Anvil would follow it up with a similar lead-in title track on Forged in Fire. Not that these have been the only two tracks in this style by the Canadian old timers, and not that "Forged..." is in any way a direct knockoff of its spiritual precursor, but it's difficult not to come away with a sense of deja-vu for the first five minutes of this third album.

Fortunate then, that "Forged in Fire" is one of the clear highlights of this disc. Set at a dangerous, slow groove, it lurches along at a spidery pace while Lips performs a treatise on metallurgy, the duality of which would not escape even the most addle brained headbangers. The vocals trade off on the signature sneers and howls, while the thud of the bass sets the momentum. I rather liked the glistening strings of melodic feedback throughout the bridge, which set at atmosphere even greater than that of "Metal on Metal", but probably the most interesting element is the counter point of the guitars in the verse. It's also an introduction to a 'cleaner' Anvil, at least in the tone of the guitars and tidiness of the drumming. Clearly more polished than the sophomore effort, with a dearth of rawness in the chords, but that said the music is stylistically quite similar to Metal on Metal and the heavier cuts found on Hard 'n' Heavy, 'pound for pound' their most muscular effort to date, if you'll forgive the foreshadowing.

That's not only due to the pace of many of the tracks here, but also the drumming. Once again, we're faced with a performance that might audibly come off as less menacing than the prior LP, but in terms of technicality Robb Reiner seems somewhat more energetic and advanced, as if he's slowly evolving along with the riffs. Outside of the title track, favorites here include "Free as the Wind", a nice atmospheric speed metal piece which served as a peculiar presage to the late 80s stint of Germans Running Wild, even funnier as the first lyrics in the song are, in fact, 'running wild'. "Make It Up to You" has a bit more of a commercial appeal, sort of like Heart meets REO Speedwagon, but while the lyrics are shitty, the music is incredibly catchy. And then, of course, you've got the closer "Winged Assassins" which serves as the ultimate Anvil tribute to aerial combat, pretty fast for the band at this time and incorporating some of Lips' better vocals on the album.

There are a number of tunes ("Shadow Zone", "Hard Times Fast Ladies") in which he utilizes a shrill, shrieking tone that almost devolves into parody, but thankfully the music is great; and others where he uses the same style of screaming more effectively ("Motormount"). We've also got what must be the best of the Dave Allison fronted tracks here in "Never Deceive Me". It still feels heavily influenced by that 70s rock that the Canadians have a hard time shaking out of their set, and far from perfect, but good enough that fans of KISS, Boston and so forth might dig it. And then, of course there's the mandatory ridiculous sex song, which is even more laughable and absurd here in that it's distinctly about ejaculating on your female partner's chest and having her rub the results onto her preferably large mammaries. This is, of course, the "Butter-Bust Jerky", and yet I know that even reading that has the potential to scar you for life. I apologize, since Anvil is not likely to.

Overall, various gripes and coital eccentricities aside, the album is quite consistent in quality and I believe it's nearly a match for Metal on Metal. Song for song, there's a lot of excitement, some tearing leads, and a laudable atmosphere which prove that Anvil were continuing to evolve as songwriters. The best was still yet to come, but they were well on their way, and Forged in Fire has a timelessness about it that is hard to ignore (much like the debut).