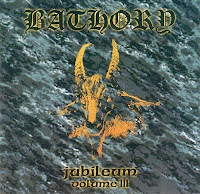 Because two near worthless Jubileum compilations were not enough, it was decided that a third be released 5 years later to incorporate material from Quorthon's mid-90s identity crisis circa Requiem and Octagon. Now, I'm not quite sure why such albums, the first quite mediocre and the latter downright awful would warrant such a treatment. Any masochist who was interested in such letdowns could surely just purchase them at barely double the cost, and there are no 'greatest hits' to be had in either case. The refinished songs included here from Blood On Ice had been so recently given an official album release that they also had no pressing need for a reprint, and they are so stylistically jarring to the content from the previous two full lengths that this is by far the most inconsistent of the comps.

Jubileum Vol. III presents one hour of material, 9 of its 15 tracks previously released through the 90s. From Requiem (1994), we get "War Machine", "Pax Vobiscum" and "Crosstitution"; from Octagon (1995) "Immaculate Pinetreeroad #930", "Sociopath" and "33 Something"; and from the entirely different Blood On Ice we've got "The Lake", "The Stallion" and "Gods of Thunder of Wind and of Rain". Not an an impressive roster by any standards, though I favor the last three simply because they are part of Quorthon's return to common sense, and the Norse themes he had begun to explore upon the masterwork Blood Fire Death. Even then, though, these are far better experienced on the full-length album with their neighbors, almost out of place among the more boring, straightforward thrashers. So in other words, about 60% of this collection is a rehash of null value.

We are left with the unreleased material, which hails from all over the spectrum. "Satan My Master" is the best of the lot, a pure grimy speed/black metal track from the s/t debut years which has eventually developed into one of their most popular classic tracks (covered by a large number of the bands they've influenced). Not that it's really one of their best, but the riffs are pure honest bludgeoning with Quorthon's rasp splattered all over them, and almost a punk undercurrent in the bass and chords. Another oldie called "Witchcraft" is here, a nice savage rush of gnarled speed with scintillating guitars, though the vocal bark is a bit repressed in the mix. "In Nomine Satanas" was the original incarnation of the track "Bond of Blood" which was later recorded for Twilight of the Gods, but obviously the subject matter was changed. I rather like this raw interpretation, but it's not cool enough that I'd go out of my way for it. Other than these, we're treated to an alternate vocal take on "Valhalla" (Hammerheart); and a pair of mediocre mid paced groove/thrashers in "Resolution Greed" and "Genocide" which probably didn't make it to the miserable Octagon and wouldn't have helped if they had.

In short, not a lot worth a damn, and I once again am left baffled as to why the rarer demo and cult tracks from all three of the Jubileum releases weren't just gathered in one place. Instead, Boss and Quorthon must have felt we all owed them another 30-50 dollars for next to nothing. Comparatively, Jubileum Vol. III might have more unreleased material than either of the earlier compilations, but as a collection of music of note, it pretty much sucks a bone. Better to listen to "Satan My Master" and "Witchcraft" elsewhere and save the scratch.
Verdict: Fail [3.5/10]
Posted by autothrall at 9:05 AM