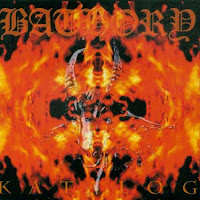 This is one of those perplexing releases that reeks of 'you have got to be fucking kidding me'. Just a few short years after Bathory had finished producing the largely useless Jubileum compilations, they go ahead and release ANOTHER. Katalog is your standard cash cow collection featuring entirely re-issued material. There are 11 tracks culled from the 10 studio albums (including the latest, Destroyer of Worlds), and presumably the intent was to con some young sucker into purchasing this as a 'sampler' of what to buy and experience next. Katalog was initially intended to be a promotional device only, so I assume it was meant for radio stations, zines or shops, but it was eventually decided to produce it in a commercial format.

The only way this works is as some sort of case study on the various transformations wrought through Bathory's career, but even then it's not worth the $.02, since you could just as easily build your own mix CD or shuffle your .mp3 playlist and achieve the same results. You'd assume each selection is meant to best represent the particular album it was initially released upon, but fuck if that's the case for the crappy Octagon ("War Supply") or average Requiem ("Distinguish to Kill"), which don't necessarily have good, at least not great songs. From the earlier archives, we get "Armageddon" (Bathory, 1984), "Possessed" (The Return..., 1985), "Enter the Eternal Fire" (Under the Sign of the Black Mark, 1987), a medley of "Odens Ride Over Nordland/A Fine Day to Die" (Blood Fire Death, 1988) and "One Rode to Asa Bay" (Hammerheart, 1990). All are good choices, but at the same time, more poignant when listened to in their native environment. Rounding out the track list are "Lake of Fire" from their new (for the time) effort Destroyer of Worlds, "The Woodwoman" from Blood On Ice and "Twilight of the Gods" from the album of the same name, plus another of the band's dingy, brief outros, a useless inclusion.

And that's it. No unreleased material, strong remixes or re-recordings, etc. Had this been a bonus disc included with Destroyer of Worlds (dropping "Lake of Fire"), it might have proved a sweet little perk aimed at younger fans who were not familiar with the band's legacy, but as a standalone product it's shit. Might as well just procure an envelope, stuff some cash or a check in it and send off to Black Mark Production asking for nothing in return. In the end, this is just as void of worth as those Lake of Tears compilations Black Mark churned out in 2004.