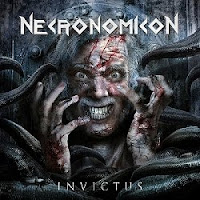 The tenacity of second/third tier Teutonic thrash acts like Wicca, Vendetta, Accu§er, and Necromonicon is nothing short of inspirational. Even if the best most of them can muster are average beatings which pay tribute to their individual legacies, while dowsing them in the production standards of the present, the very fact that they've overcome large gulfs in their careers and returned with a sound remarkably inattentive to trends touches some murky space in my heart. Sure, some will argue that they're merely attempting to use the present rekindling of their genre as a 'second chance' at the spotlight, and that if they really cared they wouldn't have vanished in the first place, but the sounds I'm hearing on their records, while often flawed and unmemorable, do not at all mirror such a sentiment.

Necronomicon has long been a less structured, less impressive alternative to its popular peer Destruction, but there's no doubt that they've evolved their writing through time, and even less that they've improved as far as production. Earlier works like Escalation and Apocalyptic Nightmare had a particular charm to them, all thanks to the coat of amateurish grime that a low budget permits, but since reforming in the 21st century they've ramped up considerably for a more professional sound. In this, too, they reflect the changes of Schmier and crew, but where that band maintains a firm, angry thrashing presence, Necromonicon seems to veer off into a slightly power metal territory on a number of their tracks here, perhaps more reminiscent of Headhunter. Certain tracks here highlight this more than others. For example, "Invictus" itself has a riff in there that sounds a lot like on of Priest's "Painkiller" guitar progressions, while "Unleashed" and "Unconquered" are total power/thrash hybrids with leads that reflect the more driving, melodic side of the spectrum, akin to post-90s Rage.

Freddy's rasped vocals, however, remain almost fully within the snarled thrash camp that was represented on the earlier albums, and the combination of the Germanic raging mutes and chords and his fevered grit is one of the strengths of Invictus. As usual, Necromonicon is a fairly dynamic band. You'll get plenty of variation like the Iron Maiden bass break in "Unconquered" or the acoustic intro to "Face to the Wall" (another spot where they remind me of Judas Priest from the intro to "Night Crawler"), but the best parts of the record are almost unanimously where they throw down the gauntlet of aggression in "Pandora's Box", "Thoughts Running Free", though these too have a clear Euro power metal imprint circa Accept, etc. There's also a sweet re-recording of "Possessed by Evil" from their s/t debut (1986), and I love the sheer enthusiasm of the vocals and the bricklaying of the guitars. Perhaps an entire remake of the first two albums would not be such a bad idea in a modern context?

Ultimately, though, Invictus is not all that great an album, and I felt that it fell shy of even its direct predecessor Revenge of the Beast in 2008. It's not bad, mind you. Necronomicon has a mature, seasoned sound to them, but it rarely manifests in a song that endure in the memory for more than a few minutes. Add to this the derivative construction of many of the guitar riffs and you get another album which seems wholly content with settling into mediocrity. What I'd love to hear is for this band to go utterly fucking crazy. Look at the explosions Paradox has written since their own desire to once more breach the theater of warfare. Necronomicon once had a snarling, raw character to them redolent of Sentence of Death, and I would not be averse to hearing some of that over the redundant power metal riffs that saturate this record. Invictus is not a total shot in the dark: it's balanced and professional, it just doesn't excel in the songwriting, which is what I most look for in any record of this type. That said, if you LOVE that old German tone and the recent efforts from peers like Vendetta, you might give it a listen.