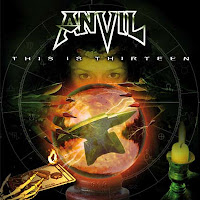 I've already gone on at length about Sacha Gervasi's documentary on the life and times of aging Canadian rockers Anvil, and even written a full review for the film, but I do feel it's crucial in understanding and interpreting the mindset of these gents so late in their careers, performing in a field generally reserved for the young, testosterone bleeding hellions with something to prove. Not that Robb Reiner and Lips Kudlow have ever lacked in that androgen hormone, as their long legacy of silly sex songs has amply proven, but these guys were really at a stalemate by the middle of the 'oughts. Albums like Plenty of Power and Still Going Strong were middling and underwhelming, and while Back to Basics (2004) marked an improvement in actual songwriting, the vocals were weak enough to dull its effectiveness.

Enter This is Thirteen, and the band's decision to shell out some cash and reunite with British record producer Chris Tsangarides. A wise choice, as it turns out, because this was the best Anvil record since Pound for Pound, or should I say, the first GOOD album the Canadians had issued in nearly 20 fucking years. This is huge, ugly sounding heavy metal the way these boys were playing it through the 80s, polished but pummeling. Now, I can't squarely lay the credit on Tsangarides' shoulders alone. To be honest, the production itself was not a major issue for me in experiencing the band's output from '92-2004. Worth the Weight might have been a little dry, and Plenty of Power a little clean and stale, but the real stigma was the lackluster songwriting. Never outright bad, and there were acceptable tracks strewn through the Mausoleum and Massacre years, but none of them comparable to the first five full-lengths...

Well, now we've got the songs. And the sound. Even the vocals have made a turnaround, no longer the lazy, dry and disheveled presence of Back to Basics but the more vibrant, howling and piercing range he exhibited in the band's formative years. As early as "This is Thirteen", the first track on the album, a slow and superstitious lurcher redolent of "Metal on Metal" or "Forged in Fire", Kudlow stretches himself to the limit, and it never once drags down the effective drudge and doomed sensation of the riffs beneath. Songs like "Worry" and "Flying Blind" sound like they're being launched out of the 80s via rocket and crashing directly into your stereo speakers, and even if they're not among the best the band has written, they still carry that inherent enthusiasm that made Anvil so exciting in the first place.

Personal favorites here are "Bombs Away", in which Glenn Five gets to strut his formidable fingers below a set of concrete, flowing chords that channel the listener straight into the band's prime. "Game Over" also kicks some serious ass, bringing a little of that dirty Motörhead smear back into the band's repertoire, with some bluesy shuffling, and again, strong bass lines. It's also pretty hard to find fault in "Should'a Would'a Could'a", "Ready to Fight" or "Axe to Grind" which all feature a fond mesh of NWOBHM and 80s power metal virtues. Hell, the closing cruiser "American Refugee" even has Lips sounding like a Mike Muir guest spot. On the other hand, there are a few tracks that admittedly lag behind. The slow "Big Business" with its' Iron Butterfly wannabe riffing was far from a highlight, and I could go either way on the grooving of "Feed the Greed" or the somewhat bland "Worry".

Yeah, there's nothing here on the level of a "Blood on the Ice", "Metal on Metal" or "Fire in the Night" but that's to be expected. The genre was far fresher in the 80s and its works will always, for all history leave a stronger impression on both those who got to experience them the first time and those newer and younger fans who awaken to their glories decades hence. That Anvil finally pulled their shit together and ceased their incessant string of mediocre, going nowhere albums that stretched back for many years. Not that they had ever entirely given up on their dreams, but This is Thirteen sounds like a band which has gotten over its midlife crisis, grabbed its Viagra or tantra lessons or whatever and finally become reinvigorated, reassessed of its own inherent magic. There is nothing wrong with good old heavy metal music. There never was, and never will be, no matter what trends might arrive and conspire towards it becoming obsolete. Never gonna happen. Anvil's 13th record is far from amazing, perhaps, but it's proof positive of an enduring legacy and genre, and that sticking to your guns will eventually put you on target.