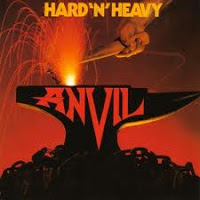 Many people were probably introduced to the Canadian mainstays Anvil and their blue collar heavy metal struggle through the Anvil: The Story of Anvil documentary in 2009, but it's quite interesting to note that aesthetically, things have not changed much in their camp since their full-length debut over 30 years ago. Hard 'n' Heavy does emerge from that hazy, hard rocking blues underworld that better known peers and predecessors like Judas Priest, Accept and Saxon all traipsed about on their respective debuts, but their mix of serious, sexual and silly lyrics is one that they'd maintain until what is now going on forever. There are only a few tracks here that I'd deem truly 'great', but as a whole the debut has that remarkable ability to feel fresh even today, when the genre as a whole has evolved to the point that some of its more extreme artisans have become the auditory equivalents to things like fifty car pileups and industrial grade blenders.

There's a particular youthfulness here that not only ties to the lyrical content, but also the reality that Steve Kudlow was only in his mid 20s when it released through Attic. Hard to believe that 'Lips' was ever a strapping young man, but here it was, and the inexperience does often show in the writing. Not that there is anything petulant or entirely immature here, but a few of the guitar riffs are so basic that even by the early 80s they felt familiar. On the other hand, Hard 'n' Heavy certainly sounds seasoned enough in the studio, with a great balance of crisp guitar tones circa both Kudlow and Dave Allison, and Robb Reiner's strong, workmanlike drumming which feels like it's coming from the room opposite you. The central focus is on Lips' vocals, which were and remain among the more unique in the heavy metal spectrum. His tone is both boisterous and fragile, manly and about to shake apart, but he deserves credit for his ability to pitch between brief shrieks, enormous chants (as in the bridge of "School Love") and the steady mid range that he generally associates with the verse lyrics.

Not all of the tracks here have ever had the same level of impact on me, but at least it opens with a bang in "School Love", one of the more badass with a big if predictable verse rhythm and some of the band's better early licks. Especially that proto-thrash sequence in the bridge at around 1:30 which seemed a few years ahead of its time. My other favorites are "Bedroom Game" and "Ooh Baby" which both seem like pure, driving Priest worship with a dash of Deep Purple; and "Hot Child" which is loaded with these great, rocking guitar grooves that instantly hook themselves to your ears before the first verse canters into its march-like, percussive structure. This one also has a great, atmospheric chorus which carries off into the rafters. I'd like to also give some credit for Anvil's cover of the Stones' "Paint it Black". It initially fooled me into thinking it might be a cover of "Barracuda" thanks to the opening triplets, but I actually quite like how Kudlow's vocal just soars in the chorus segments, making for some mighty entertainment.

One of the problems I have with the album is that a few of the tunes feature Allison on lead vox rather than Lips. He's not got a bad presence, per se, but he immediately changes the landscape so I feel like I'm listening to something KISS or Poison would have released in the mid to late 80s. Sort of a controlled, rocking abandon that just doesn't measure up to the better tracks. A lot of these early bands suffered from a bit of an identity crisis as they were just starting to hit their strides, and for Anvil, this was that moment. "I Want You Both (With Me)" is the bigger culprit of the two Allison is fronting, but "Oh Jane" is not a whole lot better despite the stronger guitars. That said, neither is really enough to mar the album's overall quality to the point that it fails to entertain. You'll notice a difference, but neither is inferior to the heavily 70s rock inspired "At the Apartment" or the she-demon/Australian rock tribute "AC/DC", the latter of which has the most generic riff here.

Hard 'n' Heavy is a great album if you're into long summer drives to the beach or if you suffer crippling nostalgia for the late 70s and early 80s when the Trans Am was the material pinnacle achievement of masculinity. It's got songs about chicks, school, chicks, and...more than one chick at a time, so we're not dealing with the same level of variety that you'll find on later efforts like Metal on Metal or the excellent Pound for Pound. Spiritually it seems like some unsung spiritual precursor to the feel good vibes of Priest's Turbo or a whole lotta shitty 80s glam rock, but there is certainly enough of that later, harder hitting Anvil not to pass this by in your quest for classic sounds. One of those 'static' works which never seems to age, despite itself, aside from the pedestrian, but not out of place lyrics.