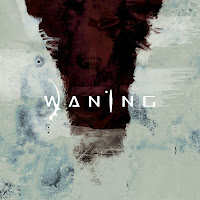 In a world where drifting, melodic post-black metal acts are all the rage of late, it's practically offensive to me that Swedes Waning have not garnered more attention for their curious take on the style. Why spend the time and energy absorbing monotonous, effortless paeans to emptiness like the recent Lantlôs or Altar of Plagues releases when there is something so much more vibrant and effective just around the corner? Population Control was a promising lattice of compact drums, huge swaths of guitar tone and an almost organic influx of nihilistic urban-industrial subtext that permeated both the lyrics and composition; and it's successor, The Human Condition does it proud, if anything broadening the scope of the unsung quintet.

The guitars are kept simple, brazen and loud through cuts like "Beneath a Septic Sun", "Void" and "Continuum", presenting a cautious balance of consonance and dissonance while they wreak emotional trauma upon the audience. Virile melodic strains will often manifest off the primary thrust of the chords, but the careful threading of the bass against the dominant riffs creates a curious level of warmth and immersion, almost as if one were glimpsing out through a fluid womb to the blinding penetration of sunlight. Waning plays a lot with the tempo of beats, so that even a more straight ahead, driving riff is given an almost mechanical variation beneath, but the best parts of The Human Condition arrive when all of the varying instruments condense into some saddening contemporary black/doom passage like the bridge of the title track, through which tremolo picked guitars careen like crashing tears until the drums drop and create the bright, droning apparition of a climax.

Another contributor to the atmosphere is the vocal presence, which proves dynamic enough that no two tracks sound quite alike. Many feature the massive, drowning black rasp expected of the modern black metal genre, but then you've got a piece like the excellent "Through Fields of Mercury" in which a more somber, bitter tone is used to set up the more barbaric snarl. I could definitely make out an almost post-2000 Katatonia influence to the compositions, only this group embeds the dreamy, depressive riffing into a louder skeletal mechanism redolent of bands as widespread as Thorns, Neurosis, Void and Thralldom. The Human Condition doesn't haunt you from the woodlands, or harry you from antiquity, but it boldly screams at you from the surrounding, suffocating walls of brick, steel and plastic of the dystopia so many of us find ourselves lost in. It's abrasive and yet strangely calming, as if just knowing its pains are alive in your synapses is a comfort, and to that extent, I would place it just inches beyond its predecessor in terms of achievement and quality. Worth hearing.