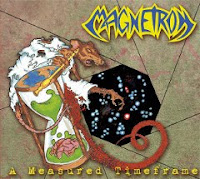 While I recognize works of brilliance in every metal sub category, and feel equally at home in nearly any of them, I don't think it's a secret that thrash is a particular field I hold dear. The 'Golden Age' of this medium (let's say 1986-1990) has produced more of my absolute favorite works than perhaps any other in the metallic spectrum, and it's had what must be the most profound influence on my own writing and musicianship. So it's ever an honor to hear a band like the Dutch Magnetron, which manages to pay libations to various late 80s sources while eking out a niche of its own, maintaining an undeniable level of enthusiasm and sense of humor without writing itself into the same corner of nostalgic stupidity that so many of these faceless retro bands settle for.

Granted, these guys have been around the way a few times, forming in 1996 and producing a string of demos in a grind style before ultimately reforming to join the thrashing crusade of the 21st century, but clearly they've got an incredible grasp of the music they've pursued here, which is namely a merger of US and Germanic thrash. The intense, harried nature of the riffs is largely reminiscent of albums like Terrible Certainty, Release from Agony and Persecution Mania, but there's also a melodic, crunching current coursed through the compositions which brings to mind the West Coast second stringers like Forbidden or Defiance. The vocals have a bit of Tom Angelripper blitz to them ("Nice Teeth", "Compulsory Communication"), perhaps due to the accent of their author, but the pitch is a bit brighter, bloodier and more garbled. Gang shouts are used percussively and appropriately to maintain the excitement and velocity of the music, and to give it more of a street level appeal rather than the surgical Destruction vibe that the technical merits of the guitars might otherwise conceive.

Not all the progressions and patterns are 100% winners, but it's almost impossible not to get caught up in the flurry of aural violence and intensity that manifests through a track like "Born Witless" or "For Your Life Let Justice Be Accused". Rapid, dynamic and organic drums blast and fuse their way to the punctuation of the mute-streams in "A Bit Consideration" and "Right to Dislike", and there is constantly the sensation of something important happening or about to happen. That said, if the band lacks in one department it's probably the choruses, which never seem to burn themselves across the memory like those influential counterparts of old. Riffs will heighten and collapse, expand and contract all over the surface of the songwriting but they're not necessarily designed for emotional impact, just to keep the limbs flailing and heads banging in a step nearly impossible to follow without an acrobatic appreciation for the genre. The lyrics are a mixed bag, all relevant and meaningful, but occasionally a bit too cheesy and 80s ("Nice Teeth", or the Tankard-like "Rob a Bank, Buy a Tank").

Speaking of 'cheese', I was rather surprised by how much I liked the cover art. Has a very 80s feel with the simpler illustration style and the old school logo, but there's a great visual spin there which juxtaposes the role of human to vermin. I, for one, welcome our future space-rat overlords and hourglass brains, but more importantly it mirrors Magnetron's ability to imbue their nostalgia and humor with an actual message. The production of A Measured Timeframe is quite humble, with thin but effective guitars, never dowsed in any excess of effects aside from a tinge of reverb, so you get a very organic, jammed out feeling to the music which gives it a feel somewhere between Xentrix's For Whose Advantage? and Defiance's Product of Society. In the end, Magnetron offer reaffirmation that thrash can be fun without being dumb, exciting without pandering to the lowest common denominator, and old school sensitive without facing an immediate dead end. One of the better Dutch thrash bands of the 21st century to date, and one worth experiencing for its authenticity, if not for its good looks.