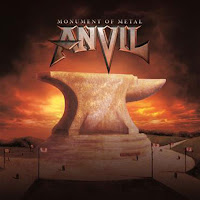 Monument of Metal is the second of Anvil's major compilations, and about the best I can say for it is that it's a fraction less worthless than its predecessor Anthology of Anvil. Sure, these releases keep to the alliterated titles the Canadians enjoy employing, and this one's got a fancy Robb Reiner cover which should thrill fans of the documentary who like that the drummer's into that, but in the end, all you really get are songs the the long term devotee has already heard, in some cases for many years. Granted, this is a more strategically positioned package meant to capitalize on the success of the film and upwards momentum of their latest studio offerings, both returns to form, but it's ultimately a massive missed opportunity to sate both the new and old audience...like so many other comps of its kind.

This could very easily have proven a great value had it consisted of 2-3 discs, perhaps with one devoted to lives and another to rare demos and unreleased studio tracks, but instead it's just one crammed disc, nearly 80 minutes of material, almost all of which is previously available on one of the band's 14 full-lengths, lives, or as a bonus track on a prior album. A handful of these are the 're-recordings' of classics: "Metal on Metal", "Winged Assassins" and "School Love", all of which sound pretty potent in their new incarnations but lack the character of the originals. "Thumb Hang" is a 'lost classic' of Anvil history, but was already included as a bonus on This is Thirteen (along with a remake of "666", which is also here). You might remember the scene in the Story of Anvil film about how this was their first written song, relating to torture in the Spanish Inquisition. While I've never heard the original rehearsal version, this sounds as if it must have been updated as more atmospheric. It's a slow, strong mover with decent, arching melodic vocals that has a similar appeal to "Concrete Jungle" or "Forged in Fire". Some sentimental value, but not entirely catchy.

Otherwise you've just got a bunch of rehashed material from the bands various full-lengths. I don't really see the point of including something from Juggernaut of Justice, which was still fairly new as of this compilation, but the title track is nonetheless present. A number of other choices are questionable. "Plenty of Power" from the album of the same name? Why bother? "Race Against Time" from Still Going Strong? "Park That Truck" from Speed of Sound? I realize their intention is to incorporate something from all the albums, but far better would have been to just dish out the quality goods. I mean, the point of Monument of Metal is to give the band's newer audience a taste of what they've been missing out on, so where is "Blood on the Ice", "Concrete Jungle", "Forged in Fire" or a number of their other pieces? Hell, where's "Smokin' Green"? They do include some of the necessary cuts like "Mothra", and surprisingly "Fire in the Night" from my fave Anvil outing Pound for Pound (great song), but it feels like an inconsistent sampling at best.

Presumably you'd just buy this if you were brand new to the band, checked out This is Thirteen or maybe Juggernaut of Justice and wanted to purchase a collection of the 'best' from their extensive backlog. You'll be disappointed, because these are not necessarily their best. I cannot recommend enough that you take the more direct route and purchase their early albums. I've always found metal tracks to be best experienced on their native recordings, even if that means they are surrounded by tracks one might feel are 'filler' from that same era. It's a far better representation of a band, and in the age of the internet you can already sample just about anything you'd want to begin with. This is part of the reason I hate comps like this, which simply don't go the extra mile to fulfill the long term followers. Not worth the money. Surely in 30 fucking years there were plenty of rare cuts, extra live recordings and such to cull material from? Monument of Metal might feature a few re-recordings you don't own from the original albums where the songs were first spawned, but otherwise its just furnace fodder.
Verdict: Epic Fail [1.5/10]