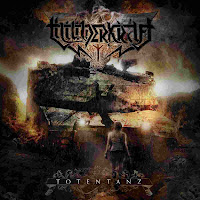 Thunderkraft released a fairly excellent debut effort, The Banner of Victory, back in 2005, which provided an interesting spin on the death metal genre involving lots of symphonic elements, a touch of industrial and groove metal and pagan warfare lyrics one generally associates with artists of a more directly heathen/black metal style. It's taken the Ukrainians some time for a followup, but it's arrived in the form of Totentanz, a more accessible and dynamic sophomore. There have been a few changes, namely in the less brutal choice of vocals and a stricter adherence to melodic black metal progressions in the riffing, but in general they paint with the similar broad strokes that such an eclectic hybrid would naturally imply.

A lot of the electronic ingredients tend to accumulate in the intros to pieces like "Mass Defect", "A Crumpled Story" and "Totentanz" itself, frivolous and brief techno sequences that tend to part when the metal riffing arrives, but there are points at which they play a more prominent role, as with "Towards a New Dawn", more or less a martial ambient track into which a beat kicks up and lots of cutting vocals, thumping drums create a pompous atmosphere. Personally I found that tracks like "A Crumpled Story", which balance sampled strings with death/thrash riffs and lots of industrial clanging and more progressive passages provided the most interesting and memorable highlights of the album, but it's a fairly consistent listen throughout provided you don't have an inherent aversion to such major use of synthesizers and lack of a punishing or truly carnal environment in the production and guitars.

Not a lot to compare this to. Perhaps a dash of Germans Die Apokalyptischen Rieter or a more electronically infused alternative to Nokturnal Mortum's folksier exhibitions. Perhaps a metalized, symphonic EBM. A few of the dirtier, groove oriented rhythms felt pretty shabby and 'jump the fuck up' to me, in particular that riff coursing through "The Future World". I also felt that the vocals for the previous album were a lot stronger. But those small gripes aside, the band gets some credit for sticking its necks out and attempting something different. With members of Astrofaes, Munruthel, and other Ukrainian alumni they've drawn upon a wide range of sounds to tread outside their normal proving grounds, and there's quite a lot to engage the ear, even if it won't all stick to the listener.