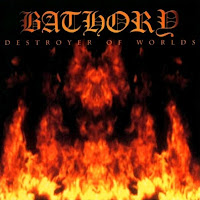 Destroyer of Worlds is an aural exhibition of an important, almost constantly evolving artist who had at long last firmly settled into a particular style, or rather two particular styles, and thus it bears some striking similarities to both the past Bathory canons of the glorious Hammerheart, Twilight of the Gods and Blood On Ice Viking heavy metal trilogy, and the sodden and boring thrash that Quorthon thought for some reason he'd dial in during the mid 90s. The roots of both are set in the grimier blackness of Quorthon's youth, but now structurally manifest through either an emphasis on soaring male choirs, lead guitars reminiscent of the slower Manowar fare, and simplistic riffs that do not exactly inspire outside of their presentation as an atmospheric component; or in lame duck, barreling thrash rhythms that seem effectively pedestrian in intent and impact.

The problems I ran into with this album stem largely from its clear division of content. If one were to glance back at the discography, nothing here is necessarily new or out of place, but there is a crippling inconsistency to how the album flows as a whole. Sorrowful, plodding sequences like "Ode" or "Destroyer of Worlds" provide nostalgia for Hammerheart or Twilight of the Gods, but then you've got the clear delineation between that and a piece like "Death from Above", which while not as miserable as, say, Octagon, is at best fueled by mediocrity, cliche and a guitar riff that some random groove/thrash bar band in 1994 might have thrown together at a moment's notice. To Quorthon's credit, he at least tries to create a bridge between these two forces, this ying and yang: you'll hear some atmosphere, distant synths and such in a few of the thrash bits, but then you've got others like "Liberty and Justice" or the pure groove shite "Sudden Death" which amount to nothing more than massive crap stains over any potential the album might have woven.

Destroyer of Worlds is in dire need of a clipping, so swelled is it with middling content, so teemed with tripe. Not only the 6-7 shoddy bludgeoning thrashers (which, in addition to those mentioned include "109", "Pestilence", and the darker and mildly less annoying "Krom"); but also a few of the more spacious, drawn out pieces. For example, the 8+ minute closers "White Bones" and "Day of Wrath" seem rather dull and bloated: the former impregnated with some pedantic groove metal rhythms in the bridge, the latter for its almost Pink Floyd like progression and inane self-referential lyrics in the third verse. You know you're really running out of ideas when this happens, and this is yet another flaw with Destroyer. It retreads numerous prior trends in Quorthon's composition, but it offers no superior or even interesting slant on any of them...

I'm not willing to entirely throw this album under the bus. It's more of a weak and confused effort than one actively terrible, but at its best, even songs like "Ode", "Lake of Fire" and the title track are underwhelming, average shadows of past glories. The album never feels as if it's transitional, whereas just about every important step of the past felt exciting and revolutionary. Many other bands had by this point taken up the Norse mythos crown conceptually (Enslaved, Amon Amarth etc), so it makes sense that Quorthon was no longer exclusively focused there lyrically, but despite the broader prose, the music itself is not reflective of such expansion. The production values are fairly level throughout, the boxy and dense guitar tone and vocals being consistent even when he's shifting ranges, but as an album it feels both redundant and conflicted, indecisive about the next steps and thus suckling at the teat of prior missteps and majesties.
Verdict: Indifference [5.25/10] (encased in lead and steel)
Posted by autothrall at 8:01 AM