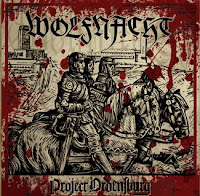 Perhaps the most enduring of Greece's NSBM acts, Wolfnacht has enjoyed a steady stream of underground interest and has never quite rested on any particular laurels throughout 13 years of output. Some of Athalwolf's earlier works incorporated a heavy punk/race rock influence, and some were almost pure traditional black metal, while others bounced back and forth. In general, I've found that I preferred the more focused efforts like Heidentum and Zeit der Cherusker, or the more symphonic strains of side project Zofos, so I was rather satisfied that he incorporated elements of all three into his latest full-length Project Ordensburg, an album that makes no secret of its bones to pick or its pride to bear.

One of the dominating characteristics here is the use of a groaning, croaking lead vocal which gives off that same decrepit vibe you might feel from Inquisition. But this is more forceful and prominent, less garbled. Athalwolf supports it with the more familiar blackened rasp and in combination it creates a chilling effect to the march of the chords and melodies. However, I will say that I found it more effective on the songs with German lyrics like "Wotans Wildes Heer" rather than the English of "Aryanismos". The keyboards here are well implemented, swells of string and choir that mesh fluidly in with the potency of the guitars. In particular I LOVED the pomp of the intro to "Aryanismos", before the tremolo melodies streamed into the fray. Another very strong component to this music is the bass playing. He creates an almost progressive feel to the lines, loads of fast picking that creates a harried curvature which often diverges from just copying the guitar pattern. Athalwolf is no 'less is more' black metaller, he's quite competent on each instrument and delivers a lot more than the bare minimum the genre often manifests.

I don't have a lot of gripes, as Project Ordensburg keeps the listener engaged for the most part. Certain tracks like the brooding "Durch Nacht Zum Licht" provide a nice counterbalance to the peppier melodic assertions, and very few were not worth hearing. I do feel that the vocals, while cool, were mixed a fraction loudly on the album. They're distinct enough that they would have still functioned against a more powerful balance of guitars and synths. The writing is a little less coherent than a Heidentum, with a broader dynamic range that segregates, say, the lunar waltz of "Wehrwolfheid" from the fell, glorious chills of "Hordaland" or the power-black cavalry charge of the title track, but most of its was enjoyable, and the production consistent. Wolfnacht is without a doubt one of the more talented one man black metal forces in this particular political niche, whether one subscribes to his beliefs or not, and Project Ordensburg, while not his best writing to date, is a clear victor over that middling EP he released in 2010.