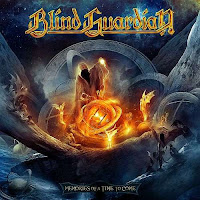 Interestingly enough, Blind Guardian has only smacked us once in the past with a compilation, and that was The Forgotten Tales in 1996, a gathering of odds, ends, covers and alternate versions that were previously only available on import singles and such. In fact, that collection was itself not domestically released at the time and I had to import it, but at least I was satisfied that I did not own much of the content. Well, that time has rolled around again, and once more the German power metal legends have satisfied this critic in that they show some due concern for their fans receiving a degree of value from what might have otherwise been a worthless repressing and reconfiguring of tracks to cash in on redundantly on their considerable, prior success.

No, most of the tracks here have at least been 'remixed'. Brightened and adjusted to meet the sleeker, 'modern' visage that Middle Earth's most lovable bards have presented on their latest studio full length At the Edge of Time. There's not a massive difference, in my opinion, and I doubt I'd ever spin this collection over the original incarnations, but the vocals in cuts like "This Will Never End" and "Imaginations from the Other Side" sound slightly more fulfilling in their presence, and the mix of the guitars less squeaky and distraught, a factor that was fortunately never enough to entirely curb my enjoyment of the albums in the first place. In other places, though, like "Follow the Blind" the vocals seem a bit wavier in quality, so to hear them so much more to the fore is not necessarily a positive thing. But at least Blind Guardian managed to add SOMETHING to the tracks, so for better or worse, they're not precisely the same.

The problem is that they've pulled off a bit of a 'dick move' reminiscent of Iced Earth's Days of Purgatory collection, where there were different versions available with varying degrees of content. Personally, I'm not fond of this practice, here or in video games or DVD sets or really anywhere. My opposition is not from a pure capitalist standpoint; clearly an individual can discern what he or she is purchasing in advance and make the choice to buy the better product. It just seems arbitrary and wasteful not to give all your fans the same amount of content, or to even waste whatever raw materials are essential to bother printing up separate products when it might save a whole lot of time and effort just to give everyone the full monty. For Memories of a Time to Come, this comes in the form of a third disc incorporated to the 'deluxe super special magnificent elite wonderful' edition, which features 70 additional minutes of content over 15 fucking tracks. Consider that Discs 1 and 2 are only around 51 minutes each, and then realize just how much you'll be screwed if you don't buy the deluxe version...

Obviously, I recommend that anyone who is actually interested in this would buy the fuller, more expensive and expansive version, because who knows if they'll just cave in and make it all available in some later pressing, and there's just so much more bulk to it. Great tracks like "Time What is Time", "A Past and Future Secret", "Lost in the Twilight Hall" and "The Script for My Requiem" are compiled there plus a few rarities like "Brian" from their 1989 live/demo promotional release, or "Dead of the Night" and "Lucifer's Heritage" from their Symphonies of Doom demo when they were actually called Lucifer's Heritage. In fact, that whole demo is here on the extra disc and it's been tweaked. But then, I don't really care for any of those particular cuts, they showcase a much rawer band in which Hansi has only the slightest trace of ability that he would later adapt into renown. The few tracks that Blind Guardian decided to fully re-record for this release were quite surprising. There's a good, heavy version of "The Bard's Song" which I love a lot more than the wimpier, acoustic versions that have long numbered as some of my least favorite content in their whole catalog. Ditto for "And Then There Was Silence".

Does Memories of a Time to Come justify the 30 beans (US) that you'll likely drop for it? That really depends if you have a huge problem with the production of their earlier records. It's not as you're getting a full remix of their discography, but the mix of oldies and from their early speed power metal years and somewhat more recent fare is interesting. A lot of favorites have been omitted like "Journey Through the Dark" and "Time Stands Still (at the Iron Hill)", and I just don't see myself desiring this experience when I could just listen to the originals and experience the full breadth of Somewhere Far Beyond, Nightfall in Middle-Earth, etc. This is a lovely package with a great looking cover, and I do appreciate the fully re-recorded versions, but it just depends how much money you wanna throw at the Germans, and how much you really need to hear the same songs with edited production. If you DO get it, though, don't waste your money on the normal two-disc version, or you'll just regret it.
Verdict: Indifference [5.75/10]