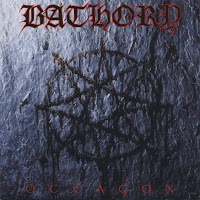 Oh, those 90s. Nearly every metal artist of credibility running smack dab into an identity crisis, trying to decide whether he or she should 'go with the flow' or stick to his or her guns. Strangely, Quorthon is not an individual whom I would have expected to succumb to such follies, but yet Octagon stands as another bitter pill to swallow, and the absolute low point for the career of Bathory. Down from the mountains of the late 80s, to the sea level of Requiem and now fully submerged in mediocre riffing and writing, disposable vocals and elements that the Viking or black metal connoisseur of Quorthon's fan bast must have found tasteless and confusing. I can only speak from my own experience, but this album was an immediate shelfer, and if I hadn't been so materially inclined to collect the band's whole legacy, grounds for an immediate return.

Don't be fooled by the eight-pointed parallel to the pentagram on the cover, or the traditional font used in the logo here, this is NOT the Bathory you'd grown accustomed to and not something Quorthon has or will ever be recognized for, outside of the obvious chinks in his armor that it represented. I've seen a lot of tell about how this is the groove/nu-metal Bathory record, and while it drifts closer to that clime than any other, it's more of a failed attempt at modern and grimy thrash redolent of what Slayer were doing post-Seasons in the Abyss. You might catch hints of similar structures to those used by Machine Head, System of a Down or other tripe emerging out of the 90s, but Slayer is the perfect comparison for Octagon, since there are a number of riffs here that seem pulled directly from the Hanneman/King playbook. For example, the descending thrash rush in the opener "Immaculate Pinetreeroad #930". The mix of grooves and primal thrashing in "Psychopath" or the bridge of "Schizianity". Or how about the vocal architecture in "Sociopath"? Ring any of hell's bells?

Nothing is straight lifted, of course, but I felt as bored and irritated by this album as I had been underwhelmed by a Divine Intervention or directly appalled by Diabolus in Musica. It's not that Octagon wholly lacks a personality, or a few 'experimental' touches. For instance, there are a lot of dissonant passages embedded in the guitars, or stolid and raw post Helhammer grooves in tunes like "Born to Die" or "Schizianity", but the riffs are almost without exception predictably patterned to the point of no return. Not one charming, resonant vocal line or memorable guitar progression exists throughout the entire play length, and even when songs like "War Supply" embellish the neanderthal thrashing with noisier, infected atmospheres it still feels no more entertaining than a taut morning struggle on the toilet after a few bowls of bowel sluicing fiber heavy cereal. The only song here I can't say I totally hate is the moody, mid paced "Century" slugger which sounds like Hellhammer and 90s Slayer in a circle stroke. But it's not good, either...

The album ends with a cover of "Deuce" from KISS, but in all honestly this sounds nothing like any other track on the entire album. A straight hard rock version with slightly more crushing guitar production and Quorthon's wild, slathering rasped vocals, but contextually it doesn't fit in with the remainder of Octagon. By extension, Octagon doesn't fit in or belong to the remainder of Bathory's discography. Not because it incorporates unwelcome, unimpressive groove metal elements or terrible lyrics in tracks like "Psychopath" that feel like something an angsty teen would pen after being the last picked for volleyball teams in Phys. Ed class, but because it just fucking sucks. The songwriting is lamentable, the vocals pathetic, and all the lofty ambitions of previous (and later) albums are rubbed into the mire of contemporary industry driven revolt.

Requiem might have been the first case in which a Bathory album failed to inspire me to set someone or something on fire, or dream of the Eddas, but Octagon was the first and only that I want to run over with my fucking car. It's not clever, it's not funny, it's not interesting and it's nowhere near acceptable.