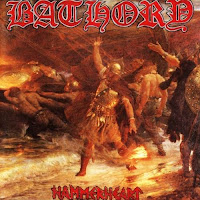 Hammerheart and its successor Twilight of the Gods were unique to me in that they were the only 'growers' I experienced in the whole of Bathory's body of work. Most other albums prompted immediate satisfaction or indifference, but Hammerheart took a span of years to accumulate its value when I was flooded with so much else at that precise point in metal history (1990), where thrash had churned out some of its most impressive and enduring works, and death metal was just digging in its heels. Of course, this was an instantaneous purchase much like anything else on the Noise Records roster, but I listened to it a few times, found that it was not as good as Blood Fire Death, put it on the shelf for a few months, extracted it, enjoyed it a fraction more, rinse and repeat for another two decades.

It's almost as if Hammerheart grows better not only with its own aging, but with mine. These days, as white threads being to poke out through the hedgerow of my facial hair, I've taken on a new level of appreciation for this trudging, Viking monolith, which nearly completed Bathory's transition from thrash and black roots to one of the forefathers of the pagan/folk metal advent that took a firm hold in Europe through the mid to late 90s. You still get a bit of rasped edge to Quorthon's cleaner tones, and the riffs possess a similar, inherent glory to those of Blood Fire Death that feel so legitimately atavist and Norse in nature, but the material here is slower, more atmospheric and drawn out. Tracks like "A Fine Day to Die" and "Blood Fire Death" itself were given plenty of space to breathe as they surged forth in their belligerent majesty, but here we experience pure paeans to the land and sea of the Sagas, tributes to the world not only of, but BEYOND the battlefields, and as such it's rather refreshing.

My favorite component to the music is the interaction of the horn sounds with the undercurrents of distorted guitar and the vocal arrangements. Some of this was carried forward from the fourth album, and yet here the orchestration reaches a new level of prevalence in that it's almost a rule and not the exception. The opening sequence to "Valhalla", leading up to the potent thrashing canter of its verse, is a fine example of how Quorthon has grown into a composer beyond the metallic instrumentation, and further evidenced by the soaring choirs he implements in this and numerous other tracks on the album. The tribal, measured Viking thrash of "Baptised in Fire and Ice" and the lurching, grooving bludgeon of "Father to Son" are other highlights, but I find that, considering the 55 minute length of the album, it's pleasant on the whole to experience, if not without some flaws. I could probably live without the obligatory ambient/choir outro, and the massive 11 minute opener "Shores in Flames" could have been slightly trimmed, but the majority of the compositions are compelling enough that I appreciate Hammerheart more than anything the band would put out later.

I've mentioned before that I've never been all that fond of the 'singing' Quorthon, but I should clarify that this is simply the limitation on the vocal chords the Gods granted the man, and not on his effort to better himself, to evolve through the process. He's no Celine Dion, but he works with what he's got. Through Hammerheart, really, you only get a taste of the cleaner tones (like the intro to "Shores in Flames"), and he largely adheres to the grimier, accented grit that was so prominent on Blood Fire Death, but you can surmise that he's further motivated by melody to match the atmospheres of the changes in the music. Hammerheart lacks the black metal core of its predecessor. What heaviness you witness here comes at either a doomed clip or a confident slower thrashing impetus, so it makes a whole lot of sense that the vocals needed to adapt along with this new vision.

In listening through Hammerheart, I like to imagine Quorthon as a skald, a minstrel-herald to the fire and wind who gives voice to and through the ice-rimmed storms that assail the ship on which he rides, and I'm sure this was the man's own motivation in choosing this style. And even where I don't love the delivery of each line, it's full proof of concept, which goes a LONG way to properly assessing and immersing oneself into the music here. The ideas might not have been all that unique, after all, we had Blood Fire Death a few years prior, and heavy metal bands like Faithful Breath, Thor and Manowar had already touted the Viking party line, but the 1988-90 Bathory era is without a doubt the point at which it was handled with what felt like genuine passion and enthusiasm, and not as a gimmick or excuse to wear helmet and furs, or to impress your groupies at the after party with the size of your 'axe'. To that extent, metal owes Quorthon another debt (in addition to that whole black metal thing), and this album, while not one of Bathory's best, indefinitely applies its titular implement to your beating hugr in a surefire, resonant succession.