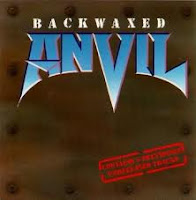 So "Butter-Bust Jerky" examined the joys of splashing your man-wax on a lover's bouncing assets, and now we've got a compilation named for a title track in which Anvil entreats us on the joys of a similar emission along the contours of her backside... perfectly acceptable to all us perverts in the audience, but it makes me wonder if part of the band's plight in not reaching the level of their North American peers in the mid 80s might have had something to do with such colorful lyrical exploitations? Probably not, but I doubt it helped. After all, "Bang Your Head" wasn't about THAT head, and "We're Not Gonna Take It" was not, at least in my estimation, a hard rocking anthem for premarital abstinence.

Backwaxed arrived at a period in which Anvil were somewhat inactive in terms of their studio output. Having rocked out three albums in three consecutive years (1981-83), the band was busy gigging, dealing with personal shit and inevitably, seeking out a larger label deal (this was the last release through Attic records). So until 1987, in which Metal Blade and the band would collaborate for Strength of Steel, this was all we were getting, and it's a mix of redundant tracks from the prior full-lengths and studio outtakes that were recorded during the sessions for both Metal on Metal and Forged in Fire. Sadly, these are hardly hidden gems, but frivolous pieces of fluff which I would also have left off the full-lengths due to their relative ineptitude.

Four of the five rare cuts were unreleased, except "Steamin'" which had appeared on the band's rare s/t EP in 1982. I'd never gotten hold of that, so it was cool to finally hear it...until I actually heard it, and it's basically your typical throwback hard rock sex track similar to what they had written on previous albums, but the lyrics suck and the music is not much better despite the bluesy burn of the lead. Two others ("You're a Liar" and "Fryin' Cryin'") also suffer the same fate, with useless and uninteresting riffs and a pretty piss poor performance of Dave Allison's vocals on the former. Then there's the instrumental "Pussy Poison" which is faster paced Priest style speed metal with some crazy flange on the opening riffs, and "Backwaxed" itself, which is a pretty loud and proud means of celebrating the 'pulling out' method of doggy style birth control, and ironically far more memorable than any of these other obscurities...

As for the rest, they basically decided to fill out 37 minutes of play time with five selections from the earlier albums. Some strong songs here, like "School Love" off Hard 'n' Heavy and "Metal on Metal" from the sophomore of the same name, rounded out by "Jackhammer", "Scenery" and of course the "Backwaxed" companion piece "Butter-Bust Jerky". But I can't help but feel this was both a retarded and redundant choice. Why not huck a short live set on the album instead? Or some demo reels? Fuck, give us SOMETHING we do not already own. The ways these are just tacked onto the end feels pretty lazy and heavily cripples the compilation's value as a whole.

Ultimately, the only tunes here that are not a waste of time are "Backwaxed" and "Pussy Poison", but neither is worth paying whatever outrageous amount it might require to get one's hands upon this release, and really, even they are not at the level of most of the fare on the first five albums. That said, these songs are not available elsewhere. Even the later, comprehensive anthologies don't sport them, so if you're an absolute die hard or manic collector, it might be worth having for completion's sake. Otherwise, listen to "Backwaxed" on Youtube or something, laugh at the funny lyrics and move along.