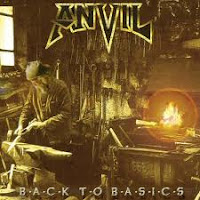 After about 14-15 years of towing the lines of mediocrity, Anvil had begun to have the opposite affect of a fine wine: aging poorly. So it comes with great relief that Back to Basics, for the most part, does live up to its name. That's not to call it a righteous comeback, or even a really good effort, but for what it's worth, the guys seem to have dug in their heels and committed to writing some decent music this time around. There are still a few shitty pieces to be found, but in general I found at least the guitars here to offer some value, whether they're molded in the straight raging metal fashion of their numerous 80s ventures or the affable hard rocking throwbacks that the band have never fully shaken off.

But there is one serious issue with Back to Basics which precludes it from ever ranking among the band's better works: the worst Steve 'Lips' Kudlow studio vocal performance in the history of the band. Now, the guy's never been one of the more refined voices in the genre, and I can't count how many times I've seen critics claim that his presence on the microphone is the critical factor in holding the band back from ever achieving a greater success. But I must entirely disagree with that sentiment. Kudlow's got an honest, down and dirty style which is a perfect match for this workmanlike, aggressive traditional metal sound, and he generally got on well enough in either his lower, gravel pitch, howls or shrieks on their earlier records. Not the case here. The man hits his notes, yet he sounds tired, beat up, and frankly I don't see how they made it out the door in this final form...

Exhibit A: check out a few of the more hard rocking, older school tracks like "Can't Catch Me" or "Keep It Up". The tone of the guitars is great, the riffs themselves pretty driving and engaging, and yet the vocals sound like a lazy rehearsal that the band decided not to re-track. Even the backing vocals throughout the album seem bland and lacking confidence, and it surely cripples the album from being their best since the 80s. In particular, his performance on the power ballad "Cruel World" is awkward to experience, not that the song would be great otherwise. But say, for example, you took "Can't Catch Me", removed Lips and threw on a girl rock band like the The Donnas, Girlschool or The Runaways. Could have even kept the shitty but well meaning anti-infidelity lyrics and the thing might even end up on MTV. Or would have, at some point...

Anyway, he doesn't muck up the whole process here, and he's acceptable on most of the better Back to Basics tracks. Like the previous album, Anvil kicks this one off with a stock, mid paced power metal chest pounder in "Fuel for the Fire". The riff progressions aren't all that unique, but it's nonetheless bangable (in head form). "The Chainsaw" is another standout, with its dark and distorted intro and drudging, dirty grooves. I rather like how the music implies some sort of serial killer mood, but the lyrics are actually about deforestation. Lips sticks to his lower, angrier range ala Algy Ward or Lemmy Kilminster and it doesn't stand out so sorely as some of the neighboring tracks. "Fast Driver" has some force behind it, and "Bottom Feeder" has quite a good groove to it, with Robb Reiner's wildest drumming on the whole record (though the vocals are a bit embarrassing).

Back to Basics might have been a minor success had they spent more time waiting for a better vocal take, whether that involved a few 'cheats' and edits or not. I appreciate the honesty with which these guys have always approached their writing, but in the end I still want the finished product to kick my ass, and this album doesn't. It's one of the better albums with Ivan Hurd on the guitar, and the last full-length he'd fully partake of (a few of his solos wind up on This Is Thirteen), but unfortunately this fact would not coincide with some riveting return to form. Hey, at least the cover art is better than that last batch.