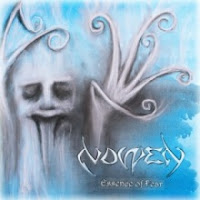 Nowen's 2010 debut Nothing But Hate was a decent, rare hybrid of death and thrash that unfortunately did not rise to the radars of so many who might have enjoyed it. But the Finns have returned for another go at that elusive recognition, this time with a firmer grasp on compositional structure and a more methodical, muscular array of production values that might help their appeal towards the younger, wider audience. Where the first album placed its focus on a brighter, thrashing set of guitar progressions, Essence of Fear almost serves as a treatise on what might have happened had the Floridian legends Death mutated into some hybrid of Spiritual Healing and thicker toned melodic Swedes like Arch Enemy, Hypocrisy, Unleashed and Amon Amarth. A peculiar way to describe this, and perhaps not always on the mark, but then, these guys are one of those unique if not innovative acts that do not so easily fall in step with any particular categorization.

This is reflected in the broad, yet consistent dynamic range of the album. The band will alternate between double-bass driven old school tremolo death metal riffs highly reminiscent of albums like Leprosy or Spiritual Healing ("The Egotist", "The Honor"), and swaggering melodic epics like "Sacrifice for Nothing" which would not be out of place on Twilight of the Thunder Gods (though it's not THAT catchy). They also rip into a threw propulsive thrashers like "Deadly Force" and "Path of Destruction" that resemble a hypothetical jam session between modern Destruction and the Angela fronted Arch Enemy material. All of this is performed with an incredible level of taut precision, and the tones here are unanimously strong, whether it's the steady cement drumming, the loud and curvy bass or the punchy, spurious guitars. I would not call the band excessively indulgent or flashy by any means, their prowess is determined wholly by their ability to gel as a unit, a symbiosis that is nearly mechanical in its execution.

Unfortunately, if there's one component here I don't love, it would be the vocals. Not that they aren't fitting for the style, or lacking some variety themselves, but the harsher midpoint betwixt the rasp and guttural just isn't my thing. In places I was reminded of a male Angela Gossow with a dash of Chuck Schuldiner. In Lappis' defense he also churns out some lower gutturals, but then even these feel rather bland. The richness of the guitars and rhythm section might be far better paired with a style that has more character to it. In the mix, these vocals are loud and center, but they have no real capacity to snatch attention away from the guitars. That said, they're not a major negative here, I just had the pervasive feeling that there was enormous room in which they might improve. In general, Essence of Fear is slightly tastier than Nothing But Hate. I think I liked the energy and momentum of that album more than this, but I can't deny that the power of the riff set here is more enduring. Anyway, it will be interesting to see if a band who so carefully bounces between modern thrash, old school late 80s death and melodeath can find its audience.
Verdict: Win [7.25/10]