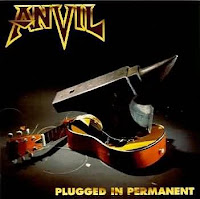 As much as I've enjoyed Anvil in the past, and as much as I always want to sympathize with their plight after seeing their documentary, I don't think it should surprise anyone why they had to endure such a sagging relevance for so long a time. The Canadians just weren't writing the flagship, crowd pleasing cuts that they were once known for, and throughout the 90s they failed to produce a single album that I could compare favorably to a Metal on Metal, Forged in Fire or Pound for Pound. 1992's Worth the Weight was a real lull, with an almost emotionless emphasis on technicality (drums and guitar) over quality. An interesting shift in priority, but thankfully for its follow up they'd return to a more entertaining aesthetic.

Plugged in Permanent does not mend all the fences, and it's not a major improvement in terms of enduring anthems or strong composition, but it's at least far more lively and vibrant than its predecessor. Sebastian Marino had flown south to join Overkill, so they brought on a newer 'permanent' replacement in Ivan Hurd. Worth the Weight was also the swan song for long term four-stringer Ian Dickson, so they acquired Glenn Five, who has since proven an icon for the band, not only for his shaved head and braid flinging around at live sets, but also his more ample use of his instrument, plunking along adventurously below the bludgeoning dual current of the guitars with far more of a natural, quirky curiosity than his forebear in the position.

In a sense, Plugged in Permanent was the birth of the 'second classic lineup' for Anvil, one that many who experienced them on the various small tours and festival dates they performed in the later 90s on into the 21st century would recognize, before their recent resurgence. There's still quite a lot of musical intensity here, though instead of the intricacy of the guitar-chitecture it's delivered here more through sheer speed. Unlike a lot of their 80s output, you don't hear much slow material. "Guilty" is a dull bone cruncher bringing up the rear, and "Destined for Doom" lives up to its namesake, but otherwise the songs here are played fast and frenzied, which keeps Plugged in Permanent far more exciting than it is interesting. Cuts like "Racial Hostility", "Face Pull", "Truth or Consequence" and "Five Knuckle Shuffle" hurry along with something to prove, but none of these really deliver the money shot riffs or chorus you'd hope for. Okay, "Five Knuckle Shuffle" might deliver a 'money shot', but of a different sort...

A few of these tracks were minor hits for the band, or at least made it into the circulation of their live set: "Doctor Kevorkian", which they filmed a video for, and "Smokin' Green". The former is not all that great of a song despite its choppy attitude, but the latter, despite being a pedestrian marijuana hymn lyrically, is actually one of the strongest of their 90s tunes. Killer leads abound, and it's effectually the apex of the vibrant waves of energy that thread through the 46 minutes of material. I feel like, next to this, most of the others are lacking that something 'extra', but I'd still take them selection over almost anything on Worth the Weight.

The lyrics here are not a strong point, with a lot of nap inductive PC ranting in "Destined for Doom" and "Racial Hostility", but I admit that I really like how Lips uses a lower, more gravelly vocal tone throughout a lot of tunes like "Face Pull", "I'm Trying to Sleep", as if he's channeling a bit of his pal Lemmy Kilminster. If only the songs had been a little more memorable overall, I might cite this as a true return to form, but despite the appreciable enthusiasm of the writing, it has never left much of an impact crater on my mind. A step back in the right direction, sure, but I think Anvil needed a leap.