Ominous Crucifix - The Spell of Damnation (2012) 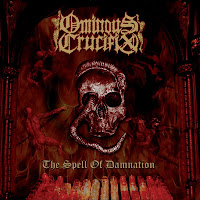 Mexico's Ominous Crucifix is another of many 21st century bands culling an influence directly from the late 80s/early 90s death metal roots, and yet it takes an alternative approach to the majority of younger acts channeling Left Hand Path, Mental Funeral and Mortal Throne of Nazarene into a reverb drowned present. No, their F.D.A. Rekotz debut The Spell of Damnation might better be compared to the warlike ministrations of classic Bolt Thrower, at least in the drumming and atmosphere, though the vocals have a bit more ghastly breadth to them which recalls a Schuldiner, Reifert, Tardy, van Drunen or Kam Lee rather than the gruffer, drier Karl Willetts. In addition, there is a fibrous, textured guitar style which resonates with the 90s work of New Yorkers Immolation, only the production here is a lot more raw, and the riffs never so dynamic.

A lot of slower, double bass driven passages make for the majority of the album. Bricklayer death metal. One gets the impression that the lower muted rhythm guitar sequences are churning up his or her guts into wet, bloodied cement, and then steamrolling it with mobile artillery. The bass plods along beneath the dense guitar tone as if it were near-coagulated blood streaming through the gutters of the battlefield. Vocalist 'Rubens the Mercurial Herald' hurls a lot of panning, carnal syllables about the primary vocal line, and you definitely get the same sense of up front shock and extremity that you did in hearing those classic 90s death metal records, yet he doesn't ever sound particularly hostile or abominable, and part of this is just the banal lull that the supporting riffs often create.

Tunes like "Putrid Purity" and "Primitive Sun" balance off rather mediocre chugging grooves with the more caustic, atmospheric tremolo patterns, but while I can't claim to have been snared by any of the riffing progressions here, Ominous Crucifix never ceases to create this sure sense of momentum, from the cradle to the grave. One could easily envision fans of primal and simplistic US death circa Jungle Rot or War Master lurching and lumbering about a pit to this music, and they certainly have a penchant for slowly building up atmosphere through the tracks, not to mention an appropriate choice of frightening samples to inaugurate "Defiling the Altars of an Absent God" or "Third Day Resurrection". Ultimately, though, the Mexicans don't hurdle the writing barrier to the extent that I feel compelled to continually revisit their music.

If you're into spacious, simplistic chugging and moiling death metal and you don't set the bar all that high, then there would be no reason to miss this out. The Spell of Damnation delivers what it needs to that it might feed off its own, consistent flow of pummeled viscera, but unfortunately, nothing more.