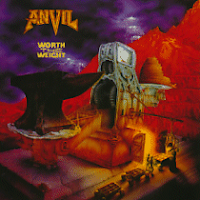 The Anvil of the 90s turned out to be considerably less appealing than that of the 80s, not for any lack of trying but for a lack of those same, memorable results that numbered their formative output among the best heavy metal exports of Canada. Part of this was due to the decreasing popularity of the style they played, and a larger part was their misfortune at being tossed around between labels, shifting management and band members. Full-length releases were scarce, at least in the former half of the decade, and what we were given was hardly anything to write home about. That Worth the Weight was the band's most thrash oriented album is no coincidence, as the band had brought aboard Sebastian Marino to replace Dave Allison, a man many might know better for his later move to the East Coast staples Overkill.

So what we have here is what must be the most technically inclined and frenetic of all the Anvil recordings, with the implementation of tremolo riffing (as in "Embalmer") and a copious load of frantic lead sequences which feel incredibly structured compared to the previous record Pound for Pound. From a proficiency perspective, Kudlow and Marino really shine here, and there's no shortage of innovation to their playing, at least compared to prior Anvil records, but this factor is betrayed by the dearth of quality sing-a-long songs. The war drums and harmonics which lead into "Pow Wow", the shrill vocals used in the chorus of "Sins of the Flesh", the straight muted thrashing rhythms (and sexual double entendre) of "Bushpig" and the groove and drive of "Infanticide" all seem like a fresh canvas for the Canadians to paint upon, though stylistically they don't deviate a lot from the formulas on prior albums. Unfortunately, none of the songs really have an impact. The drier, spiffier guitar tone fits the new paradigm of the writing, but it feels nowhere near as heavy as its predecessor, and even though the note sequences can seem intricate and explosive, they're rarely if ever memorable.

Even worse, the vocals are rather limp throughout. There are these points at which Lips emits these puerile screams on tunes like "Infanticide" and "Embalmer" where I felt myself cringing, and yet by far the low point of their career to its day was the balladry of the opening sequence to "Love Me When I'm Dead": "Sadness", in which the vocals meander all over the spectrum, the only ligament to bind them the awkward means by which they panhandle the depressing lyrics. Anvil had spared us such atrocities in the past, but clearly Worth the Weight was not the place to start in on this tripe. There are some positives to the album, like the sheer ability wrought through the guitars, and the fact that they didn't become an all-out, Pantera worshiping tough guy groove metal band like so many other speed, power and thrash metal acts from N. America in the 90s, but after the climactic and immensely fun Pound for Pound this record felt rather lifeless, dry and uninspired. In short: it wasn't worth the wait.