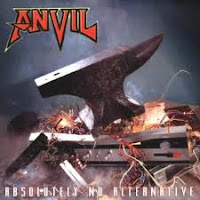 Absolutely No Alternative is just another of those 90s era Anvil records which, while doing nothing particularly wrong, failed to further the band's influence and audience. Don't get me wrong, I do appreciate the band's overt, titular stance on the dregs of that decade which crippled metal music to begin with, but there is ultimately so little to distinguish this effort from its neighbors, nor does a single song from its selection belong on a career highlight reel. At the very least, this proved a cement lining for the Canadians' relationship with Massacre Records, which began with its predecessor and endured 'til Back to Basics in 2004. It was good for Anvil to have a home, but I'm not sure they ever capitalized on that security.

This was more or less Plugged in Permanent part II, the only differences being that the band dialed down the energy and enthusiasm a small fraction, and Lips stuck almost exclusively to his lower vocal range, leaving the impression that Anvil were going for a Canadian Motörhead vibe with a more complex (but less bad ass) palette for guitar composition. A handful of tracks here are engaging and fun musically, namely the chunk in the middle of the playlist that includes "Hair Pie" and "Rubber Neck", but nothing really leaves a lasting impact. There are a great deal of strutting, grooving guitars performed at fairly explosive speeds, with an enormous influence from the boogie of 70s hard rock and its evolution into the NWOBHM sound, but you'll also hear a consistent undercurrent of primal, thrashing patterns that the band had always manifested, even in their formative early 80s material. That said, so few of them are arranged into unique or memorable patterns that when something DOES, like the bright, atonal chords woven into the song "Green Jesus", they really make me pine for an Anvil that would stretch itself further...

Not all THAT much further, but whenever this band waxes creatively, it shines through their tendency towards drab, light-hearted predictability. I also found the lyrics throughout the album to be a strange, subdued contradiction. It's not that the Canadians haven't always flaunted their silly sex themes alongside the more serious contemporary issues, but it just seems so bizarre to have social themes like "Hero by Death" and "Black or White" pressed up against more lovingly exploitative titles like "Show Me Your Tits" or "Red Light". I mean, I like breasts and vaginas as much as the next guy, if not more, and Kudlow and the gang are obviously not attempting to flaunt misogyny, but I guess I just never noticed how much of a contrast it creates within the space of an album. That aside, this is stock Anvil for the period. Great drums, goofy lyrics, competent leads, decent bass lines, a handful of riffs that will whip the listener into a headbanging frenzy: all too easily forgotten within an hour or so of the experience.