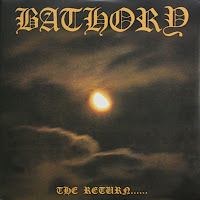 To dub The Return... a disappointment would be like condescending to a good massage after a fit of passionate, memorable intercourse. It sure feels good, but it just cannot match the climactic intensity and release you were experiencing just a few minutes earlier. Or in the case of Swedish abomination Bathory, a year earlier. Don't get me wrong: The Return... is a puerile, forceful and even brutal album. I'd state with a straight face that it was more savage, primal, atmospheric and barbaric than its predecessor. But the riffs here are just not as good, the energy level somewhat curbed and a bit more emphasis on the weight and rock-groove of the guitars than the sheer blitz of dirty speed metal that dominated Bathory. That album was a straight razor of sinister intentions, this is more of a vulgar machete with a mildly dulled edge.

The band was still in a trio format, though Andreas Johansson replaced Rickard Bergman on the bass. The intro and outro play out much the same as on the s/t. "Revelation of Doom" is a bit creepier than "Storm of Damnation" due to the more roiling torrents of guitar distortion and the pronounced, if distant looped screams, but I still feel as if it just goes on too long. Give me just a minute of this, or cause something more to happen, because even in the span of 3 and a half minutes I grew a little tired of it, and the hidden :25 second outro is too brief and useless to stir up any reaction. There are a few songs which I found spiritual successors to the first album, like "Bestial Lust" or "The Return of the Darkness and Evil", the latter having some similarities to a straight Slayer speed thrasher ("Chemical Warfare") with corpulent tremolo picking in primal but menacing patterns. Most of Quorthon's snarling and rasping is well in line with the identity he had manifest earlier, but I actually found that it had less of a ghastly, wavering character and more of a focused, cutting grimness to it that was marginally less effective.

However, he does occasionally add some spice to the mix like the expansive backup gutturals in the chorus of "Born for Burning", or the more ritualistic growls in "Reap of Evil". Considering how few bands were using the style at the time, it's no wonder that The Return... is cited an influence upon the death metal genre as well as the black. Back in the early through mid 80s, a boundary of distinction had yet to really be drawn, so they shared a lot with Hellhammer in that small class of progenitors that transcended simple categorization. But what I find pretty clear about The Return... is that it has a far more muscled punk or hardcore influence than its predecessor. Songs like "The Rite of Darkness", "Sadist", "Son of the Damned" and "Total Destruction" brandish a lot of open, grooving chords that crash back and forth along the axis of the semi-burst beats. They'll often incorporate some solid mid-paced pure thrash riffs ("Born for Burning" and "Sadist", for example), but I rarely found any of the note progressions here to be as searing or diabolically enthusiastic as a "Sacrifice" or "Necromancy".

Aesthetically, The Return... is brighter and more dynamic than the generally moody darkness prevalent on the s/t album, and here there is really no contention as to its influence on a metric shit ton of later DIY black metal recordings in the underground. Once more it's produced by Quorthon and Boss, so it stands out from the mainstream in that Bathory never had the purse or the desire for tracking down some big name producer and wider cultural acceptance. Almost messy in its determination to tear and bludgeon the listener's brain, but the bass a fraction less pronounced (in both volume and composition) than it had been before. The drums seem a lot more crashing akin to the later Blood Fire Death, lacking that subtler constant tinniness that permeated the debut, and I found that the actual structure of the guitars very often serves as a foreshadowing to that later, monumental masterwork.

In the end, though, this is really no more than a 'good' black/thrash metal album. Worth owning if you love Bathory, worth owning if you enjoy the primordial sounds that would stretch and settle into the style so many enjoy and emulate today, but it's not possessive of their best material. It's louder and about 10 minutes longer than Bathory, and the lyrics on par, but those are the only areas in which some physical aspect matches or exceeds its forebear. I can't think of any legitimate reason why I'd break this out over any of their other 80s full-lengths, but it's probably on par with all of those later works upon which Quorthon decided he was a 'singer'. Fun enough for frenetic sessions of head banging, appreciable for its place in the canon, but it's no Deathcrush, To Mega Therion or Under the Sign of the Black Mark.

This is the one review in a long time that you've written that I think you're totally off the mark on. This album basically created a template that was used by a plethora of BM groups/artists in the early 90s. It's nearly perfect.

I must agree to vehemently disagree, sir. It has the same template as the album before it...so it wouldn't be possible that The Return created that template. Even the setup of the intro and outro feels the same, the lyrics are similar.

In 25 years I've never liked this album as much as Bathory, Under the Sign, Blood Fire Death etc. And that impression hasn't changed through this latest listening. Riffs are less interesting, vocals less grimy. Obviously I still like the album, the score reflects that. But I've never once broken it out over any of those choices, and still would not. That's totally on the mark enough for me.