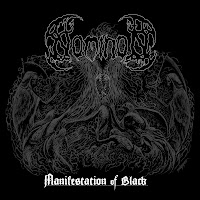 Nominon were one of those Swedish acts barely filling out their death metal diapers when countrymen like Entombed and Dismember were already establishing names for themselves, and yet the fact that their existence dates back to 1993 puts them well ahead of the hordes of Left Hand Path wannabes we've heard in recent years. To date, they've produced a number of solid full length efforts like Diabolical Bloodshed (1999) and Recremation (2005) which provide the same tangible excitement as their forefathers, without seeming like 100% derivatives. To supplement their four albums, they've issued a number of short player EPs through their history, the latest of which is Manifestation of Black through their latest imprint, Deathgasm Records.

Obviously the value here is somewhat confined due to its brevity, but for what it's worth, the title track is one of the best the band has written in some years, with solid tremolo riffing and unbridled, demonic energy redolent of some of the heavier Dismember records. The tones are not a far cry from their most recent full-length Monumentomb: grimy and muddy distortion which leans more towards an organic representation than a heavily polished one, immediately creating an inherent, murky darkness that honors its title. "Burnt Human Offering" follows suit, not a hell of a lot more charming than the first track but fully consistent in style, and I do like the thrashing impulses buried near its aft. The drums and guitars here are quite rich, the bass appropriately dense and shadowing the rest of the mix, while the latest vocalist Henke Skoog gives a ghoulish performance that would make L-G Petrov and Matti Kärki proud.

All told, you're only getting about 8-9 minutes of new music here, and who can tell if it's going to be included also on their next full-length (their last EP, Omen, was not exactly bristling with exclusive material). I wouldn't reach for this over Nominon's first three albums, but it's decent and gritty old school death metal from one of Sweden's longest lived devotees of the form, and it has only to contend with its own shortness of breath.