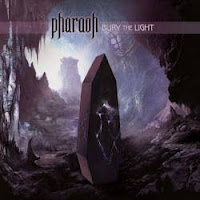 How does one surpass what might arguably be considered the best melodic US power metal album of the 21st century to date? Be Gone was just such a piece, an effort of impeccable craftsmanship in its gleaming guitar architecture, tonal mastery and the pinnacle of Tim Aymar's balance of fragility and focused fire. Composition that drew equally from 80s power, speed and progressive titans like Fates Warning, Omen, Helstar, Savage Grace, yet brewed it into a modern froth of finesse and accessibility. How do you top it? Or, more accurately, how do you live up to it? In the case of Bury the Light, Pharaoh's fourth full-length, you continue forging along the same path, with the same standard for memorable hooks and rhythmic versatility, and prove once and for all that you're not a band capable of dishing out anything less than your best.

No, it's not quite so inspiring and flawless as Be Gone, but Bury the Light is still likely to go down as one of the best albums of its type in this or any other year beyond the brilliant 80s. I felt as if there was an even heavier technical thrash influence circa Heathen or Paradox in the riffs of tracks like "The Wolves" and "The Spider's Thread", and the overall atmosphere through the 9 tracks seems somewhat darker and moodier, but it's hard to deny the traditional flair of straight drivers like "Burn With Me" which can counter the rush of power chords with elegant muted dual melodies, transient leads and an incredible level of skill. Guitarist Matt Johnsen is simply a force with his instrument, and he performs in a clinical yet beautiful style that waxes both an absurd level of precision and an ear for flinging the listener into the vortex of majesty and sorrow that defines the pensive lyrical vistas. Next to his prowess, the rhythm duo of Chrises Kerns and Black has its work cut out for it, but the pair matches every calculated shift in tempo and exudes an aura of professional complexity that you just don't hear among others in this field...

Pharaoh is one of the few metal acts recording today which gleans the genre's possibilities for the future instead of miring itself solely in the past. Thus, while you might feel familiarity for the traditional, beloved power anthem in a piece like "Castles in the Sky", there is no escaping how 'current' it feels, how snappy and adventurous and void of stagnation. Johnsen's myriad melodies cascade about the album's atmosphere like drops of crystal rain colliding into one another. The aesthetics of illumination and tragedy are inescapable, and yet the rugged, multifaceted edge of Aymar's delivery grounds the material in a way that some wimpier, traditional Kiske or Tate like screamer simply wouldn't do. There is a light at the end of this tunnel. This music still matters. There is hope yet for the eventuality of this oft ailing, laurel resting genre, and its agent provocateurs are a bunch of old schoolers from Pennsylvania who prove, once again, unwilling to let nostalgia alone control their collective voice.