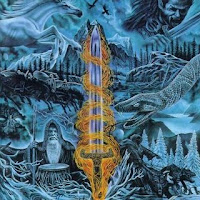 By the latter portion of the mid 90s, Quorthon was in desperate need of a turnaround, as his once mighty Bathory institution seemed to be unraveling at its seams; his writing devolved into phoned in, dull thrash and groove metal which wouldn't have sufficed even a decade before its release, when the genre was still shaping up. I just don't see the appeal in creating a bold new genre of music, like the Norse themed folk-tinted metal that he manifest and progressed through the trio of Blood Fire Death, Hammerheart and Twilight of the Gods, and then sputtering out into something more pedestrian like Octagon, or Quorthon's grunge rock solo records, but thank fuck the man would come to his senses and return to the Viking path.

Granted, Blood On Ice was not a remarkable return to form. In fact, it wasn't even necessarily a new album, but enough of the content had been restored and supplemented from the original writing and recordings in 1988-89 that it feels like at least a sidereal movement from Twilight of the Gods. Originally, it would have served as a bridge between Blood Fire Death and its follower Hammerheart, and structurally, it's a lot like the latter. A lot of glorious, open passages guided by cleaner, layered vocals, with a handful of brief, folksy acoustic sequences ("Man of Iron", "The Ravens") to break up the more substantial bulk of the heavy metal tunes. Curiously, while I've never been the biggest fan of his cleaner vocal presence, Quorthon sounds admittedly tauter and more professional on some of these cuts than anything he'd done to their day (in 1995), and a few of the softer segments lend credibility that the guy could have written a pure folk record and built up a following that way.

Tunes like "Blood On Ice", "The Woodwoman" and "The Lake" rely heavily on their atmosphere just as much as Twilight of the Gods, so Bathory was continuing to move away from the central guitars so important to the first five records, instead writing riffs to support the woeful choirs of winter depression and unrest. But where this all comes together, like the acoustic sequence at around 3:50 in "The Woodwoman" or the enthusiastic canter of "Gods of Thunder of Wind and of Rain" which feels like Neil Young astride a long ship, you're getting a solid experience worthy at least of it's chronological predecessor Twilight of the Gods, if nowhere near as poignant and crushing as his seminal works in the style. There are some problems with the production, for instance the cheesy slap of the snare drum in "Blood On Ice", but in general, for something that was recorded and reworked from two different periods of Quorthon's career, it comes together fluidly.

My favorite tune here is surprisingly the expansive closer "The Revenge of the Blood on Ice", which more than any other places my psyche upon the same cold, battlestained vistas of the 1988-1990 material, and Bathory had long possessed a rare ability to write lengthy songs that incessantly draw the listener into their depths (since "Enter the Eternal Fire"). However, there is a bit of derivation and excess familiarity. For example, you'll hear a VERY familiar drum beat in the bridge of this piece, and a lot of the soothing, structured choir vocals feel as if they were just lifted from and slightly tweaked from Hammerheart. That said, compared to Octagon, this feels so enormously inspired, from the beautiful cover image to the obvious amount of effort Tomas placed in its salvage and reconstructive surgery. Rather than continue to crash along for another decade (aka Metallica), the Swede seems to have recognized his errors and righted them before they could run quickly out of control. Blood On Ice is not one of his best, but it comes near to compensation for the lackluster comps and albums that he'd been spewing forth since 1991.
Verdict: Win [7/10] (long tall beautiful people fallen lifeless to the ground)
Posted by autothrall at 9:15 AM