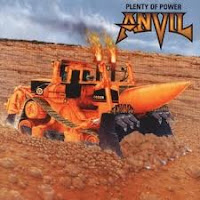 The 90s felt like a decade of lost causes for traditional metal bands, and it would have been nearly impossible for a group like Anvil to make any headway when the misguided youth were awash in the revolting tides of gangsta rap, boy bands, grunge and the 'alternative' rock scene which was born of numerous genres. So many of those apes who were newly drawn to metal, or formerly enamored of thrash, USPM and NWOBHM would become converts to the raging tough guy and drug addict attitudes of bands like Pantera and Cypress Hill, so what could be left for an Anvil or an Exciter? Not a whole fucking lot, so it's a miracle than such acts managed to stay afloat when it seemed like the world was ready to shove them face first into the dust. Thank the stars for metal festivals, Europe, Japan and that dwindled population of loyal headbangers who somehow kept it all worthwhile!

Sadly, I can't follow up such sentiments with any proclamation that Anvil would soon return to relevance, or write that long-anticipated comeback album we all knew they had in them. Why, I myself had been waiting for such an album since 1988's Pound for Pound. For a decade they had toiled with the law of averages. Plenty of Power had plenty to prove, and yet it manifest as what must be one of the band's most joyless exercises in composition to its day. The gaudy, ugly cover art might bear some relevance to the title, but it's one of the worst in their discography, and the songs aren't much better. Anvil were attempting to tap into the 'issues' of these times, tackling internet addiction ("Computer Drone"), turn of the century Armageddon ("Ball of Fire"), or the plight of the middle class everyman ("Disgruntled") that they'd been on about since Strength of Steel in 1987, but then tempering the seriousness with "Pro Wrestling" or the sad pair of self affirmation tracks in "Groove Science" and the lame "Real Metal"...

Seriously, you don't need to justify your existence as a metal band with weak 'I don't give a fuck' lyrics aimed at critics and the non-metal audience, nor by listing off some of your past album titles in one of the verses. Or, rather, if you do this, the music had better be damn good enough to forget such pitiful prose. "Real Metal" is instead one of the most pathetic tracks on this album, a mix of uninspired demi-thrash rhythms upon which a half-decent lead is wasted. Compare and contrast this with listless numbers like "Ball of Fire" or "Plenty of Power" itself, mediocre riffing made even worse by the phoned in vocal patterns that show only a faint resemblance to any of that rugged charisma Steve Kudlow exhibited through the 80s works. He's not heavily relying on his Lemmy-like lower grit as much as he was on the previous pair of albums, but he's got very little to show for himself here, on an album that includes not even ONE good chorus, and a metric fuck ton of boring hard rock Skid Row boogie riffs in songs like "Beat the Law" or "The Creep".

Not every song here sucks entirely in the composition category, but almost any case of the guitar getting interesting is only due to its deviation from the norm. They once again try the tremolo proto death lines in "Pro Wrestling"; and "Computer Drone" incorporates some decent, leaden grooves through the oozing bass lines and slow, thrashing chops. But the majority of the tracks never reach any of the excitement levels that one would find on Forged in Fire or Pound for Pound in the 80s. The production is clean but lifeless, and strangely enough there's no silly sex song on the core album (not counting the bonus track "Dirty Dorothy"). As much as I'd been pining for Lips and company to kick that tradition, it's sad that it had to come amidst such an uninspired crop of songs that should have been left on the cutting room floor. Plenty of Power is not the worst album in the history of our species, nor even particularly terrible, but it's the first time I think I ever felt that the band sounded 'old', a strange descriptor to cross the lips of such a lover of old as I.
Verdict: Indifference [5/10]