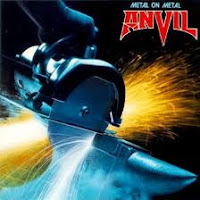 Anvil might have had a pretty good start with Hard 'n' Heavy, but it was the sophomore Metal on Metal that would usher in a new wave of attention towards the Canadians and very nearly hand them a hall pass to the level of notoriety bursting like fireworks around a select handful of other North American metal luminaries in the same era. Yeah, we all know how it turned out in the end, but no one can deny that this time, the band came strapped with more than just the good intentions and raw testosterone of their heavily hard rock influenced debut. This time they brought a 100% genuine anthem with them that would remain their best known song for all the decades to come. In fact, there are people out there who likely know Anvil ONLY for the track "Metal on Metal", as if the rest of their storied saga could be swept under the rug.

And it wouldn't be hard to plead their case, because this is one of those timeless monsters that simply won't escape your memory once it's pounded itself in there. Personally I loved the clever use of their namesake in this and other album/title track selections, but beyond that you've got this unique, dark and swaggering brute which features the appropriate metal clanging gimmick that you'd expect from the title. Immediately we're introduced to a darker, heavier Anvil with far more muscular guitar tone, and Steve 'Lips' Kudlow, while still utilizing the same range as the first album, seems as if his balls have dropped, or he smoked a few packs before churning this out in the studio. Huskier, manlier, and bolder, the near growls in the bridge stand out as a welcome warning that you are about to get your skull caved in by the weight of it all. Doesn't hurt that the lead burns like molten steel, the backing shouts are well developed and the damned central guitar riff is one of those so simple and effective that many other bands were probably slapping themselves in the forehead that they didn't come up with it.

But that's not the only great track here, and a number of its neighbors possess a rather startling depth that I don't remember experiencing on much of the debut. The year before, the Canadians had written the first good metallic tribute to a Stones' tune I'd yet heard, and here they unleash the first to a Toho monster in "Mothra", and a good one. Solid, mid-paced Judas Priest riffing helps spin the saga of the fictional Japanese beast while spurious leads help glide it into a finely structured chorus and a killer breakdown riff which yet again seems like a precursor to thrash. Lips is all fucking over this song, and the robotized vocals at the finale are another nice touch. Another legendary Anvil cut is the instrumental "March of the Crabs", also pretty effective as it allows Reiner's pummeling abilities to rise to the fore behind the rise and fall of the melodies, and fuck, the very EXISTENCE of this piece on the album just goes to show that these guys were getting serious...

Alas, not all of the writing here lives up to this same, impressive standard. We've got another Dave Allison fronted track called "Stop Me" which by this point feels like another band entirely, and a girl anthem called "Scenery" in which one of the riffs is a bit close to "Crazy Train" for my comfort (though the song is not entirely without merit). Others, like "Tag Team" in which Lips channels a bit of Gene Simmons' rugged vocal appeal is not all that special, or the driving if bland "Tease Me, Please Me" and "Jackhammer" just can't compare to a song like "Metal on Metal", and perhaps that's the reason the album wouldn't have the staying power the band needed to ride their momentum to the top. Don't get me wrong, there are a few other delicious tunes here like "Heat Sink" and "666" to strengthen the back end of the record, but it doesn't have that pure track by track appeal that contributed to the success of an album like Kill 'Em All or Number of the Beast.

Metal on Metal deserves a lot of credit, though, for the clear evolutionary path it represented for its progenitors. Louder, brasher, and far happier, the woodshed studio tones of the debut were dropped here in favor of a more industrial strength workspace, and this is felt in the thunder of the guitars and the raw weight of the guitar tone. Even the bass of Ian Dickson sounds more metal on this effort, thunking away with abandon even when he hasn't got an interesting line to engage. This transformed Anvil from a rather average sounding, fun hard rock/metal entity into something to be respected and perhaps even feared, as the celebrity roundup on their documentary film will attest.