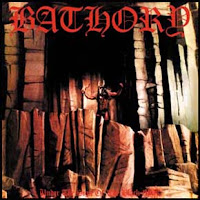 By the time Bathory's third full-length rolled around, thrash metal had produced a number of hallmarks in extremity which more than contested the Swedes' claim upon that end of the spectrum. Reign in Blood and Darkness Descends not only benefited from unforeseen levels of intensity and musicianship, but they were also incredibly volatile and pissed off to the point that they made almost anything outside of the German Big Three seem like turtles racing hares. That said, Under the Sign of the Black Mark was STILL a paradigm of aggression and evil, not through any sense of instrumental flatulence or compositional brilliance, but for the lack of all these things: the crass and compelling stench of darkness, filth and pestilence which permeates every lick played upon the album.

You wouldn't want Bathory (1984) or The Return... (1985) to hang about your local chapel or attend a family dinner, but when their successor arrived, it felt like every door and window in the village must have been shut tight and barred off, offerings of rams' blood smeared upon their wooden faces to ward off the evil that had strolled in upon a foul wind. This album is really that good, and in my opinion its pacing and structure placed the band firmly upon the pedestal from which Quorthon would never, and has never been shaken, despite the divisive evolutions that Bathory would endure in future years. Contextually, through my own perspective, I have long gone either way on the earlier albums in terms of their exact classification. They were thrash metal. Dirty Satanic speed metal. Death metal. Black metal. In retrospect, that latter category has since officially become 'a thing' of some importance, but one might still place them in all of these spheres at once and get no argument from me.

But Under the Sign of the Black Mark, at least for my humble self, feels like the point at which the levee broke on the top shelf of the Abyss, and all the damned and damning souls erupted through the crust, screaming in Bradbury-unison 'something wicked this way comes'. THIS is black metal, at its purest, borne on the nuclear zephyrs of thrash and speed and dawning into its own abominable, leering presence alongside another, more underground Scandinavian threat: Mayhem's Deathcrush. Bathory had to this point already been destined for immortality due to the spiteful, unapologetic atmosphere of The Return... and the vicious charisma of the self-titled debut, but Under the Sign of the Black Mark combines the two into a rapine rush of simple and effective buzzsaw riffing momentum, blazing fallen angel leads that cut the heavens with sighs of inevitable vengeance, and a rasped vocal so grimy and eternal as it barks through its acrobatic patterns that it feels as if Dead and Mille Petrozza found some arcane ritual through which to spiritually copulate in Hell and produce a slavering, ravenous offspring.

First, the decision to shorten the traditional intro piece was wise. Unlike "Revelation of Doom" or "Storm of Damnation", it arrives and departs swiftly with all its howling, scathing, and swelling ambiance, to the extent that I never felt myself thinking 'please get on with it' like the first two albums. And it morphs flawlessly into, "Massacre", one of the fraction of the tracks here that reflect the debut's sense for shoveling 2-3 burning guitar progressions at the audience and letting them stick like napalm. Simple, fast paced chords shift in serpentine cohesion while a louder, more disruptive, distorted bass tone (played by Quorthon) barrels below. The new drummer, Paul Lundberg is even more strenuous than his predecessor, and his performance here was a benchmark for the black metal genre as a whole. Unfeeling, callous mechanical human blast work with tunneling double bass, Lundberg makes it sound easy. All too easy. So maybe his technique wasn't on par with a Gene Hoglan, Bobby Jarzombek or Dave Lombardo: that's not the point of this, but to bludgeon you repeatedly like a burlap sack of bloodied coins.

What I find most amazing in listening back to the album is how the guitars actually somehow take a back seat to the louder vocals and drums, but the patterns are deadly, powerful and hypnotic enough that they catch your ear anyway. This was actually a process vaulted forward into the more glorious atmosphere of Blood Fire Death, but not many bands could make it work. The neck breaking, ominous grooves of "Equimanthorn", the chugging and oblique "Woman of Dark Desires", and the dire rocking fortitude of "13 Candles" are not fashioned from the most prevalent riffing sequences in the band's career, yet they forcefully carve their well deserved niches into the darker reaches of your mind with a haunting, hostile certainty. Speaking of Blood Fire Death, there's an even more prominent presage in the form of "Enter the Eternal Fire", a track that experiments with a grander, 7 minute structure and a lot of those flowing, Viking associated rhythms and hammer-drums that dominate their aesthetics in the near future. "Of Doom" is another of the many worth mentioning; the break and flow of the guitars here a tangible precursor to the sound that Emperor would master on their classic In the Nightside Eclipse in the ensuing decade.

The only, and I mean ONLY reasons that I can justify to give Under the Sign of the Black Mark a less than perfect score are simply that I found a teensy handful of the riffs (less than I can count on one hand) to be less engaging than the remainder, and the closing :25 outro as useless as the two that were on the first couple albums. Minor mars upon a near flawless countenance, but present nonetheless. That said, let them not dissuade anyone who has somehow evaded this album's infernal grasp to immediately correct that mistake, because Under the Sign is one of the most indomitable works of classic black metal, and hands down one of the greatest Scandinavian extreme metal works of the 80s. Period. No contest, with the exception of its next youngest sibling, an album I prefer due for its ability to transport me to a place I'd rather be. Whatever. Apples and oranges. Pikes and pitchforks. Own this, or suffer the consequences of your own, miserable, tasteless purgatory.
Verdict: Epic Win [9.75/10] (I stand at the jaws of the pit)
Posted by autothrall at 9:44 AM