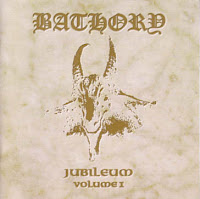 While Quorthon has been on record to discuss his varying levels of involvement with Black Mark Productions and his relationship to its head of operations, Boss Forsberg (who also produced some of the Bathory albums), I don't think there's any dispute that Bathory itself was more or less the flagship act for the imprint. Through the years, I've often enjoyed the Black Mark signings, for example the Swedish psychedelic/doom troop Lake of Tears, who have released some of my favorite albums of the past 10-15 years. But really, if you consider how much of a cult following Bathory has developed over the years, and what a demand there has been for special editions, re-releases, vinyl and so forth, it wouldn't be a stretch to assume that Quorthon was the label's primary source of income.

To that extent, it makes sense that the label would and will release all manner of collections and compilations documenting the band's evolution, and Jubileum was the first series of such. The aim here was to provide a good portion of the band's previously released material to prospective audiences, and then jazz it up with a few unreleased gems so the diehards had a reason to pump out the coin for them. Granted, Bathory is such a 'scene status' godfather for the black metal territories that damn near every fan owns their albums in some incarnation, and the last thing they really need is rehashed, redundant material when they would prefer demos, rehearsals or those few old live recordings that might have existed. But alas, this describes about 70% of the contents of this first compilation (and its successor), which is ultimately a lot more useless than not. Also, considering that that both Jubileum volumes I and II are both drawn from the band's early catalog (first six full-lengths), it's a bit lame that they were released independently and not as a 2-CD set...

11 of the track are re-pressed from the prior full-lengths, and the selection is nothing to scoff at in terms of sheer quality. "Blood Fire Death", "Dies Irae", "Odens Ride Over Nordland" and "A Fine Day to Die" all represent the very finest of the band's hours, and their finest album (Blood Fire Death), but they also incorporate a smattering of earlier pieces: "Enter the Eternal Fire" and "Equimanthorn" from Under the Sign of the Black Mark, "Sadist' from The Return... and "War" from the 1984 s/t. Hammerheart earns one proxy ("Song to Hall Up High") and the more recent Twilight of the Gods earns two ("Through Blood by Thunder", "Under the Runes"). So it's clear that Quorthon's choices here were biased towards the more viking themed material, a bias I share only in that it grants Blood Fire Death so much berth, but might not best convey the balance and evolution that the band exhibited in their formative years.

Of course, who gives a shit, because most of us who gave a damn already owned all these songs, and would only be interested in the rare bits. There's a version of "Sacrifice" here that was originally featured on the 1984 Scandinavian Metal Attack split (Bathory's proper debut) with other hopefuls like Finland's Oz and Sweden's Trash. I think we all know who got the best of that deal. Then, more importantly there are some rarer tracks like "Rider at the Gate of Dawn", a lush choir/synth instrumental of about 80 seconds that would have felt right at home on Blood Fire Death with its grim, warlike mount-trotting implications. "Crawl to Your Cross" is a dense and explosive black/thrash piece with a meaty, violent guitar tone somewhere in between the US bands Exodus and ZnoWhite. For 1989, this track was somewhat out of character for the band, since Quorthon was honing in on his viking/pagan medium, so it's understandable why it would have been left out, but I am glad to finally have heard it.

Lastly, you've got a real oldie, "You Don't Move Me (I Don't Give a Fuck") which was recorded in that total old school filth speed metal style that was further evolved on the Bathory s/t. Raw, spiteful and grimy, it's amazing to me just how much this nearly 30 year old piece sounds like the stuff you'll hear the Japanese band Abigail write today! My favorite thing on this comp, and the bass, vocals and licks are all superb despite the humble 4-track production. I can only imagine how much value Jubileum Vol I. would hold for me if there had been more material like this involved, but sadly it's just an exception to the rule. There's a lot of great music on the comp in general, but I can't think of a single reason it would be more appropriate to experience here than in its original landscape. It might have been a total bust, and been 100% rehash, but at least they felt some compulsion to pepper the contents with a few carrots on sticks for the jaded.

That said, this is still pretty useless if you're not a collector or completist. As a 7" with just the unreleased material, it might have shined. As it stands: no. Not the most shameless cash grab I've ever witnessed (check the stupendously redundant Lake of Tears compilations that Black Mark released far later), but kind of a missed opportunity nonetheless. If you DO happen to be one of the fourteen or fifteen interested parties on Earth who haven't yet experienced Quorthon in all his morning glory, then save the shells on this album and instead dive straight into Blood Fire Death, Bathory '84, Hammerheart or Under the Sign of the Black Mark, depending on your preference for his Satanist or Odinist epochs.