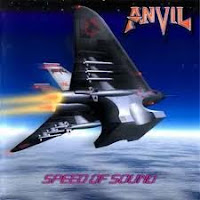 Indifference and respect. Two words that, combined, defined my reaction and relationship to the 'mid period' of Canada's enduring metalsmiths Anvil. Loved that the band were continuing to craft their music with the same love and loyalty that they originated in their first decade of output, and loved that they were trampling on down the road and proudly shucking off whatever trends were flown into their faces, without ever seeming 'dated'. Just didn't love the actual songs they were writing. Speed of Sound is, unsurprisingly, a pretty direct extension of the sounds wrought from the two previous records, and yet, if set in the square circle against its Absolutely No Alternative, I believe this album would come out on top, forcing its predecessor to tap out in the third round.

That doesn't mean Speed of Sound is great, or even really good, but there are a few tunes here which even my jaded arse would have to admit to being catchy enough that I'd listen to them more often than anything from Absolutely... or Worth the Weight. The first is the title track, a chunky and pissed off track that represents their first return to the aerial theater since their classic "Winged Assassins". Granted, the "Speed of Sound" chorus is predictable, but I love the overt use of the wind and explosion samples, the solo sequences in the bridge and the way the guitars just dig into a moderate, mid-paced chugging power metal style. Robb Reiner lays the listener out flat, and even if there aren't any particular 'money riffs' it's a job well enough done that it breeds heightened anticipation for the rest of the rock. Another highlight was the cheesy but entertaining "No Evil" in which the band utilizes creepier riffs, atmospheric keys, bells and even some tremolo death metal riffing to exit their comfort zone for a 'haunted house' effect.

For the rest of the tracks, the label 'okay' would be the height of praise I could reward. You've got your signature sex anthems like the "Man Over Broad" (haw haw haw) and the "Mattress Mambo", but neither is much good musically apart from the clever use of the guitar in the outro of the latter to simulate the some creaking cot of coital ecstasy. Anvil continues to reel in the topical material with the child violence anthem "Blood in the Playground" and "Deadbeat Dad", but again, these are quite average arrangements of grooving power/thrash. Then there are a few here which are flat out dumb, like "Bullshit", "Secret Agent" and the domestic terrorist themed "Park That Truck", all of which might have about one and a half decent guitar riffs between them. Speed of Sound is mildly dirtier than it's predecessor, with a sodden, churning guitar tone. Lips is still centered on his lower range vocals circa Lemmy Kilminster, but he exhibits a wider range throughout the album, with a few glorious howls channeled straight from the 80s. Otherwise, this is admittedly interchangeable with either Absolutely No Alternative or Plugged in Permanent: competent, marginally entertaining, but never the band at its best.