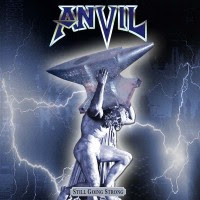 Much like the irony of Plenty of Power was its treacherous lack of said power, the irony inherent to Still Going Strong is that Anvil was clearly not going strong. Is this a better album than its dialed in, subdued predecessor? Yes, but only by the slightest of margins, and in truth the 5th album in their Massacre deal shows an irritable lack of consistency. The plan here was apparently to bake a nice, thick home cooked crust and then insert some fruit filling which was well past its expiration date, but not a chef in the house would be fooled. It's a pity too, because this is also the 5th album with their second best lineup, so you would think that they'd somehow gel in writing and lay us all flat with something after about seven years of touring and albums together...

Still Going Strong at least starts out well enough, with the straight power bruiser "Race Against Time". The clinical muted intro riff had me hopeful that the band would be pulling out another dark track of "Blood on the Ice" quality, but what manifests is a straight rager redolent of the stuff Saxon were writing on albums like Metalhead. To be honest, Lips' voice functions fluidly with this beefy, driving guitar tone, the chord selection is satisfying and any fan of mid-paced European power/heavy metal can easily bang his/her head off. Not extremely catchy, but better than anything from the previous album. "In Hell" seems to continue this pattern, albeit lurching along like one of the band's primordial classics "Metal on Metal", "Forged in Fire" or so forth. I don't like this tune so much as the first, and Lips' screams seem a little limp, but it still sounds vibrant enough that expectations are not entirely spurned.

Leave that spurning to the next chunk of the album, which begins with "Holy Wood", a wimpy hard rock tune with powerful drums that sounds like something Motley Crue would have loafed out in the last decade. Dull riffs, cheesy chorus, forgettable lead. Ditto for "Still Going Strong", another pro-metal/hard rock track in line with "Real Metal" from Plenty of Power. Only this time, they only reference themselves once in the final verse, and spend the rest of the lame lyrics waxing about how heavy rock is still around after 50 years. I'm not saying this is something we shouldn't celebrate, but pretty much anyone listening to an Anvil record has never STOPPED that self-same celebration, so the combination of lame lyrics, repetitive chorus and bad rock bludgeoning feels like a black hole opening to consume the few good songs on this album. Other lackluster showings here include the swaggering, predictable hard rock of "Don't Ask Me", the indulgent drum solo "White Rhino" and ANOTHER self-affirmation track in "What I'm About".

Still Going Strong does pick up again with the closing tracks "Sativa" and "Defiant", the former another of the band's crunchy metal marijuana tributes and the latter a decent, mid paced power metal chugger, but by then its really too late to give much of a fuck. As an EP with only the first and last pairs of tracks, it might have been a decent teaser for a full-length in the same direction, but ultimately the total riff count is hardly more interesting than Plenty of Power. That said, the album does feel as if the band had given itself a talking to, or a swift kick in the ass. Everything feels more enthusiastic. The production and performances brighter, and Lips not sounding as if he were about to start yawning in between lines in the vocal booth. A major sag down the middle, much like the aging players' physiques by this point, but maybe a glimmer of something better to come. Maybe.
Verdict: Indifference [5.25/10]