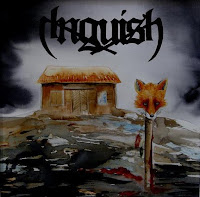 Many people like to spend their intellectual space dreaming of what might have happened if they made this or that choice in life. Or deep speculation on the future of this or that institution, technological advancement or what have you. But I find myself idly pondering the questions that really matter. For instance, what would have resulted if Candlemass circa 1986-88 had hired on Quorthon of Bathory to deliver his dirtier, gravel gutted tones over their Gothic tinged traditional doom metal? This time, there is an answer to my query: Anguish. A Swedish band, paying tribute to at least two of their mightiest metallic countrymen, bastardizing disparate elements to such a successful degree that you wonder why it hadn't happened in the first place...

You can certainly hear that Candlemass feeling to a good number of the guitar riffs, several of which feel more or less paraphrased from the elder Swedes' lexicon by way of Black Sabbath, but the presence of J. Dee's harsh, constipated drawl makes all the difference. The guitars have a potent, airy tone about them which creates a timeless tunnel back to that Golden Era of doom, but feels fresh even in the current day, and the drudging, depressive chords give you that same impression of a group of monks climbing a hill with wooden crosses that you got from efforts like Nightfall or Ancient Dreams. Simple, mournful melodies will often ring out above the chunky rhythm guitars to create a slightly more modern death/doom atmosphere redolent of other Swedish acts like Memory Garden or Isole, but largely the composition falls squarely into the old school camp, not broken and in no need of fixing.

This is a lengthy beast of an album, nearly an hour long, and I'll be honest that a few of the more swollen outings like "Dawn of Doom" and "Morbid Castle" wear and tear their welcome ever so slightly, but most of the cuts clocking in around 6-8 minutes fill out just the proper space and thoroughly kick ass. The funereal "When the Ancients Dare to Walk" and "Lair of the Gods" feature just a few of the dozens of highlight riffs on the album, and I totally admire this band's ability to break off the drums and just crank out an amazingly effective, engrossing riff that drags the listener ever lower into the sodden gears of sadness that the bitter vocals so earnestly accented through the vocal presence. In general, the band moves at a level lurch, but a few infusions of muted might hover in at a mid pace and help break up the desolate procession. The apocryphal, antiquated lyrics and titles stretch the imagination back through the millenia, and the production is incredibly well suited to the architecture of the guitars and vocals. A few of the hedgerows need some trimming, and a bit more variation in tempo wouldn't kill them, but on the whole this is one hell of a debut worth experiencing whether your poison is Solitude Aeternus, Candlemass, St. Vitus or Count Raven.
Verdict: Win [8.5/10]