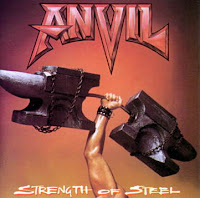 Strength of Steel is about the point at which I realized Anvil were not likely to progress much further. I don't say that like it was the end of the line for the Canadians, we all know otherwise, but the fact remains, that, directly in the middle of the 80s, when metal bands were exploding all around them, they spent four years to come up with an album that sounds more or less like a direct continuation of Forged in Fire speaks volumes as to their potential when records like Master of Puppets, Reign in Blood, Peace Sells... and The Dark were reaping whirlwinds of attention, and the genre as a whole had burst into the mainstream alongside the more fickle, empty headed glam and hard rock that served as its gateway drug.

Primarily, thrash had arrived in full force and stolen some of the limelight away from the bands that were sticking more to that heavy/speed or more traditional sound, and I think Anvil was absolutely a band to suffer from this shift in paradigms, along with countrymen Exciter. But where that band was still playing in a very fast, breakneck speed for their niche, Anvil stayed focused in on the slower brand of heavy metal that made their songs like "Metal on Metal" and "Forged in Fire" cult hits. Strength of Steel is quite a slow to mid paced record overall, and this time that fact does not always work out in their favor. In particular, the opener "Strength of Steel", while it exhibits some decent melodic singing from Steve Kudlow, and a few of the other cuts like "9-2-5" just don't pull their weight. The former is more like an intro to the record, but the constant repetition of the title seems a little uninspired and obvious, while the latter is just too repetitive, though once again, I like how Lips is stretching his pipes.

Then again, there are a few pieces here which use such measured momentum fully to their advantage. "Concrete Jungle" is a heavily atmospheric song, even more so than "Forged in Fire", and the use of the guitars as ambiance was quite impressive and unique for the period, when most bands were focused on hard hitting riff after riff. This track is also symbolic of the highly urban, middle class lyrical observations that dominate this disc, and I'm sure it's now slang use of the good old 'n' world turns heads even to this day, though the context in which it's used does make sense for the song and was doubtfully meant to offend. I also quite enjoy "I Dreamed It Was the End of the World", which has a great deal of swagger to it, and features my favorite guitar licks and chorus here, but doesn't exactly pick up into faster territory.

Of the rest, I found a sort of mix of those I enjoyed, still enjoy and then others which I couldn't care about or remember if you trained me to with some electric shock treatment. The closer "Paper General" is pretty good, with brazen melodies similar to what Running Wild were writing in the latter half of the 80s, and "Cut Loose" and "Straight Between the Eyes" are reasonably entertaining, though the lyrics are mediocre at best and I don't like the vocals on the latter (the harmony reminds me of tripe like Bret Michaels), which involved Dave Allison. The instrumental "Flight of the Bumble Beast" has some decent leads and guitar progressions, but I almost wish they'd lengthened it and added some vocals. On the other hand, "Mad Dog" is a track I particularly revile, one of those generically plotted blues/hard rock hound dog pieces which sounds like it was added more as a joke than anything. I'm also not fond of "Wild Eyes", which feels a little like "Forged in Fire" in the verse, with those lurching guitars and counter chords; though in truth it's a cover of Canadian rockers The Stampeders and the vocals aren't much alike.

I will say that Robb's drumming here continued to improve, with a lot of double bass and dynamic tension that honestly manages so steal the thunder away from the guitars and bass. Lips has also really settled into his range, and this was perhaps his most concrete, if not the most memorable performance to its day. Dave Allison doesn't do lead vocals here at all, but perhaps that was for the best. Production wise, it's slick and clean like Forged in Fire but there is still some depth to the guitar, and certainly the drumming. Considering that it arrived after an uneventful quartet of years (unless you count Backwaxed), and that it was the band's debut for Metal Blade, I had hoped for much more, but while it actually managed to chart on Billboard here in the states, it felt like a clear halt to the momentum they showed in the early 80s. There are good songs here (still), and it's a 'good album', but not the blockbuster they needed.