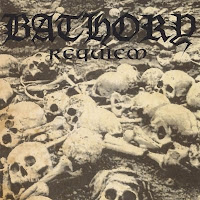 Requiem doesn't feel so much a 'new Bathory' as one that branched off into an alternate reality at around the time it might have followed Under the Sign of the Black Mark, then somehow found its way back to the natural chronology of the band. After the pair of rather lacking Jubileum compilations, I would have taken just about anything new and original from the vaunted Quorthon, but was not expecting an album which clung so tightly to the pure thrash aesthetics one would expect elsewhere in the scene. Essentially, Requiem is what we might have gotten had Quorthon decided not to delve into his self fulfilling prophecy of viking majesty, but instead attempted to trade blows with a lot of the grimier, aggressive US and German thrashers that dominated extreme metal in the mid through late 80s.

As such, it's not all that poor of a choice. This was a musician unafraid to reinvent himself, who in doing so helped give birth to a number of sub-genres that remain massive today. Requiem is not some monotonous, point for point impersonation of Exodus, Slayer and Metallica, but there is clearly a bit of US street thrash influence circa Anthrax, Dark Angel, Exodus and S.O.D. in pummelers like "Suffocate", "Requiem" and "Distinguish to Kill", some of which even feature rock out solo breaks that also remind me of the more down home, contemporary American thrashers. The tone used on some of the meatier guitar lines is fairly boxy, redolent of the Finnish band Stone, but the fact that Quorthon sticks with his ghastlier black metal vocals through much of the disc does help it stand out from most of the other 'modern' thrash metal that was spewing forth to an unwelcoming audience in the mid 90s.

Unfortunately, I found them to be the least distinguished and charismatic of Bathory's repertoire to its day, with little but their dry, raw timbre to really propel them. Little of the memorable, vile slather of the Bathory s/t or Under the Sign of the Black Mark. The album inevitably becomes a potpourri of a few finer, choice moments and a bunch of average thrash riffing which, while not even bordering on incompetence, might not have even been effective if it arrived when that music was at its peak momentum. I really like the atmospheric intro to the title track with its distant tolling and eerie synthesizer, and Quorthon wrings a lot of corpulent thrust out of the ensuing, palm muted frenzy, but the riffs just aren't that memorable. Another piece I mildly enjoy is "War Machine", for the simplistic, swift flow of the central guitar and the use of sirens to create a belligerent atmosphere, but even this one has a filler riff in the chorus. "Apocalypse" has a bold, churning martial appeal to it, with some subtle melodic overtures that hint towards Blood Fire Death or Hammerheart, but it too falls shy of perfection.

Hell, even the cover image, while not terrible, is underwhelming, but I don't think I could argue that it didn't capture the stripped down aesthetics of the record. Requiem is the Bathory that might have been, were Quorthon not so inspired and inspiring in the first place, but just another in a sea of thrashers so crowded that some of its most brilliant European authors failed to garner the audience they deserved. This album was a little late for that boom, with most of the thrash audience moving on to hip hop, alternative, grunge and other 90s genre giants. It still sounds like Bathory, just not the one that would launch a thousand dragon ships and etch itself into the annals of immortality. A hollowed out headbanging experience, the aggression dialed up and the atmosphere available only in small pockets. It could get worse, and maybe it will...