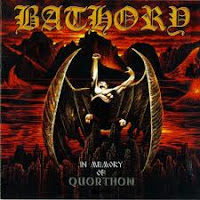 Finally, a Bathory collection which doesn't suck? Well, that all really depends on what format you choose to acquire it in, and what exactly it is you're looking for in such a fan package. For example, if I were to break it down into the three independent CDs which one can still seemingly purchase from Black Mark, it doesn't carry a lot of weight. But the full deal, with the poster, booklet, and bonus DVD is quite comprehensive in both CD and LP formats, and thus the preferred option. Surely this is superior to the awful Katalog comp or the individual Jubileum releases, but there are a number of what I'd consider strange omissions and the same miasma of incompleteness that populated the latter.

First off, you're getting a considerable number of remastered tracks, spanning the 1984 self titled debut through the 2003 swan song Nordland II. I've never had significant personal issues with the production of anything Quorthon had released for Bathory, just minor nitpicks, so this is not a major boon in my opinion, yet the fact that they're all given the treatment helps gel them together as a unified collection, despite the studio production variance of their roots. Choices are pretty good, with important cuts like "Blood Fire Death", "A Fine Day to Die", "Enter the Eternal Fire", "Raise the Dead" and such scattered about the three discs, but the selection is far from restricted to the classics, so you've got examples of the mid-90s thrash mediocrity ("War Machine") and a boat load of inclusions from the more recent Nordland sagas.

There are also quite a number of covers here, which were originally recorded throughout the Bathory canon, some appearing on various editions of full-length releases and some I'd never heard before. Some of the choices are very obvious, like "Ace of Spades" or "War Pigs" which are not that impressive other than getting to hear Quorthon's uneven accent. I found the KISS tributes to be much more entertaining and obscure choices, in particular "Black Diamond" which really benefits from the power placed in its translation. Lastly, though, you've got a pair of covers from the Quorthon solo career, namely "God Save the Queen" (Sex Pistols) and "I'm Only Sleeping (Beatles), and I didn't really enjoy them outside of appreciating the guy's obviously eclectic tastes. A few of the originals from the two solo albums are likewise present, like the heavy rock track "I've Had it Coming" or the atmospheric "Boy" with all its samples. Despite my disdain for the albums in general, these are not poor representations, though I would have clipped them in favor of more raw Bathory.

The songs with his sister Jennie Tebler are much less appealing. "Silverwing" is pretty boring crunch rock ala Evanescence with the female vocals flowing over them. Once they enter into a harmony, it's not so bad, but the solo strands of her voice sound like a miserable wannabe of Lacuna Coil or The Gathering. Nor do I much care for her version of "Song to Hall Up High", which closes out the third and last audio disc. It would have been far cooler, and really reflected a sense of completeness if the demo and rare tracks from the Jubileum collections had been gathered here. Still in print, perhaps, but considering the price for this boxed set it would not have set them back so much, and ultimately it might have spared the fans from wasting their money on the older collections if they hadn't already. So, some omissions that would dramatically improved the value of In Memory of Quorthon, but in the end you're still getting about 45 tracks, all remastered, so at least some minimum effort was applied by Black Mark.

Finally, there are the perks and 'omake box' goodies that usually come with these media boxed sets. The poster is absolutely retarded, nothing more than an advertisement for the set that you just purchased with a classic pic of Quorthon. I would have rather it just included the latter. The booklet itself is enormous, a pretty comprehensive biography with lots of photos and notes, but not necessarily anything novel or unexpected if you'd been following his career. The DVD itself is not brimming with content, just the full video for "One Road to Asa Bay" which is little more than a bunch of guys in armor, costume, riding a horse, etc all quite slowly to the roiling pace of the music; an MTV interview clip in which he discusses his transition from the occult lyrical focus of his earlier years to the folksier Norse mythology, and some random promotional footage also from the same 1990 era. Nothing too impressive here, least of all the video, but it's a decent add on for the diehard who might feel the urge to occasionally listen to his/her hero speak.

Needless to say, if you can get your hands on this collection, it stands head and shoulders above its predecessors. I wish it had more to it, and I'm sure everyone does, but as far as a posthumous memorial, it's comprehensive enough not to disappoint. I wouldn't say it was worth purchasing if you already own all the studio albums, but even then, if you want to show more financial support to honor the legend, it's far more reasonable than Jubileum or the needless Katalog. You are getting SOMETHING for your money here, which is more than I can say for a large percentage of shit-eating collections put out for major bands. As of 2011, a nice vinyl box also became available which includes a picture disc of the whole Bathory s/t. Keep that in mind when you're mining eBay, since the format is all the rage and very likely to become a collectible of high value.