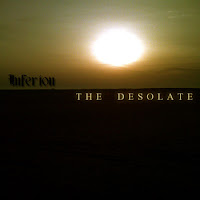 Despite an extremely low profile, Floridian black attack Inferion has existed for quite some time, about 15 years by the time this album was completed, though it's finally seeing release in the year 2012. I will readily admit to having no exposure to the band's demos or 2003 full-length debut, but if The Desolate teaches me anything, it's that there is a truly talented core to this group which manifests almost entirely through the guitar riffing. Frustratingly, I felt that there were certain attributes of the production and drum programs that betrayed the overall quality of the music, but even if this fact dampened my inevitable reaction to the whole of the work, there is simply no denying the duo's ear for effective melodic textures.

The thick, boxy tone to the guitar is highly conducive to wringing out emotion from the sorrow spun chord sequences of "Among the Twilight" and "Forgotten Ethereal Visions", and I was often reminded of that hypnotic effect a band like the Germans Endstille often evokes in me, though Inferion also use a lot of straight, melodic tremolo sequences redolent of Swedish acts like Dark Funeral. There's also a current of clinical death metal found in the bridge of opener "Among the Twilight" and the later "Purest Evil", which leads me to believe the band might have evolved from a black/death hybrid, though the latter style is clearly the less represented. My favorite tracks were strangely the most atmospheric, like the tear stained trills that permeate the instrumental "Numerous Lactations" or the driving, rocking closer "Withering Deities" which operates off these dense, textured chords and hypnotic bass curves which are captivating.

Alas, while the construction of the guitars is in general quite well polished and thought out, there are a pair of factors which diminished my enjoyment of the album. The mechanical drums, for one, while programmed meticulously to match the riffs and melodies, simply felt too forceful and emotionless, a characteristic that just didn't jibe with the chords. Obviously there are a lot of black metal albums that I love which employ this technique for various reasons. Sometimes it works, sometimes not. In this case a live drummer would give the grand, swelling architecture of the guitars so much more room to breathe through. The other detriment was the vocals. It's your typical, abrasive and loud rasped layered with some underpinning growls, but through The Desolate it grows rather overbearing, monotonous despite the duality of tones...

I'd love to hear more variation there, whether that be through the employ of cleaner passages, or a more saddened snarl without such brute force as this. Granted, the multi instrumentalist and songwriter Nick Reyes did some of the mixing, mastering and vocals while he was deployed in Iraq, so some leniency is required, but I still got the impression that Inferion is struggling to break entirely free of its larval stage, the wings still unable to completely unfold. Also, I can't compliment the choice in cover or logo font. Those need to go. Period. Otherwise, I would be remiss to discount the potential here. If Reyes can write more of these rich, emotional passages and embellish them with more interesting vocals and the flexibility of acoustic drums, we could have another unsung, and fairly unique USBM force just waiting in the wings.