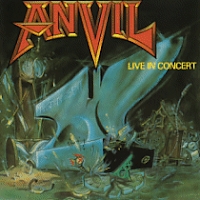 Eight years and five studio full-lengths into a career seems a very reasonable point at which to release a live record, and so for their final Metal Blade outing we were treated to Past and Present: Live in Concert, recorded in San Pedro, California. Having seen the band a number of times at fests and other gigs in the states, and I can say that they do put on a pretty fun show, Lips the proverbial heavy metal front man with a riotous presence. However, I cannot attest to having ever heard them sound THIS good in such a setting, so credit should be given to the band, the producers and the man at the sound board for delivering such comprehensive clarity. In fact, the album might seem a little TOO clean, in that the set selections so eloquently capture their studio atmosphere.

But basically, anyone who loves the collective 80s Anvil output is bound to enjoy this mix of favorites. Personal highlights from their career like "Blood on the Ice", "Forged in Fire" and "Metal on Metal" each sound fabulous. Material from Hard 'n' Heavy is nowhere to be found here, but that's never been their most popular, so if there were to be an omission that album makes sense. Metal on Metal is well represented with the title track, "Mothra", "March of the Crabs", "Jackhammer", and "666"; while Forged in Fire is covered through its own title track, "Motormount" and "Winged Assassins". Only one track makes it from Strength of Steel ("Concrete Jungle", a wise choice) and then "Toe Jam" joins "Blood on the Ice" from Pound for Pound, which was their latest at the time. The final three tracks on the album are each medlies of two songs ("March of the Crabs/Jackhammer", "Metal on Metal/Winged Assassins" and "666/Mothra"), which I found a bit unusual, since splitting these would have made the CD at least flow better...it'd be nice to visit the latter halves of these without fast forwarding.

I might have liked another track or two from Pound for Pound in the set, but what the band has included here all sounds excellent, with a clean and punchy guitar tone, solid bass plugging courtesy of Ian Dickson and vocals that feel quite authentic to their former, studio incarnations. Granted, you won't get a lot of the added howls and layered screams from the records, but in a way this more stripped approximation of the material delivers just as authentic experience even if Anvil seems mildly less 'wild' throughout. The mix is superb: while I would normally think that Reiner's drums might steal the thunder, they're kept appropriately balanced so that the melodies and minor vocal nuances shine through. Crowd participation is present, but never overwhelming, you'll hear this most in between the paired up tracks. In all, Past and Present is a rock solid representation of the band's material, perhaps not set up in the most explosive set list progression in this track order, but as smooth and clean as other quality live albums from the 80s like Live Without Sense, Live After Death and so forth. Further proof that the Canadians were a 'total package' deserving much more attention than they received in this time.