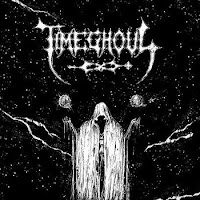 A few years back, I wrote up a review for this Missouri obscurity's second demo, Panaramic Twilight, a rather unsung and exemplary foray into science fiction inspired death and doom which has seen a resurgence in popularity thanks to the widespread 'word of mouth' that is the internet. Dark Descent Records has thoughtfully paid heed to the myriad cries for a reissue, and thus both of the band's mid 90s tapes are now available in one convenient location, with new artwork, packaging and lyrics. It couldn't have come at a better time, honestly. The hydra of death metal nostalgia is in full bloom, its many heads devouring new generations who have tired of the technical excesses of the genre's modernization, and Timeghoul manage to fit that old school bill while retaining a progressive, dynamic personality all unto themselves, in a rare space between the sounds and aesthetics of Nocturnus, Deicide and later Pestilence records upon which the Dutchmen flew off into space.

Of the two demos included, I must admit some favor towards the Panaramic Twilight material (1994). It seems far better organized, cleaner and more approachable as far as its production values, and incorporates a grander, more absurd narrative. But there isn't a massive stylistic gulf from the Tumultous Twilight sessions (1992). The songs went from 6-7 minutes to even more expansive lengths, but the core techniques remain much the same. A burgeoning, low end death metal frenzy incorporating all the brutal squeals and early Deicide chugging you could ask for, complete with low gutturals on a level not unlike Demilich. More intriguing is how the band incorporates a lot of the clinical, surgical guitars that dominated late 80s tech thrash opuses like Watchtower's Control and Resistance, Deathrow's Deception Ignored or a handful of the Mekong Delta records. It creates this constant sense of exciting variation in which the listener cannot fully predict what will happen next, and that's part of what keeps me glued to BOTH of these demos, and generates a pang of sadness that they weren't able to take it all further.

Timeghoul took chances, and a lot of this can be heard in the breadth of vocal choices. They can pull off chanted, unnerving clean harmonies ("Boiling in the Hourglass") or the grunting/rasping hybrids made popular by Glen Benton ("Occurence on Mimas"). I prefer the actual gutturals to an extent from the first demo, but the creepy ambient breaks, morbid cosmic intro transmission ("Occurence...") and aforementioned chants really make a wealth of difference. The lyrics are superb, especially for those into science fiction and horror, whether that be the grim future revealed through the Warhammer 40K fiction or the more ominous, isolationist atmospheres wrought by the legendary Arthur C. Clarke. Like Nocturnus and Voivod, this band excels at taking the listener to its source of creative chaos through both the words AND the music, and the marriage of pummeling, sporadic rhythms and frightening speculative brain candy was a huge part of its appeal to me personally.

I am a god, the prime being
I shall impale you
On the crumbled pillars of the millenia

I can cite a few minor gripes with the production of the earlier demo, such as the fact that the tone of the guitar is a little ruddy and some of the rhythm notes lost behind the percussion of both the drums and vocals, but this was pretty typical of early death metal albums in that whole Roadrunner and Earache scene (particularly some of the Morrisound productions like Deicide and Gorguts). And really, it's a demo, so one can't expect too much. Not to mention that Timeghoul addressed all of this the improved Panaramic Twilight, and songs like "The Siege", "Gutspawn" and "Infinity Coda" are well worth hearing regardless of the mix. Ultimately, this is a band which deserves to be experienced by all who missed them the first time around, and a Complete Discography is the perfect vehicle. Whether anything further comes of this is anyone's guess, as the band's own website seems rather nebulous on the possibility, but either way, this is worth the investment for any sci-fi death metal sicko dreamer.