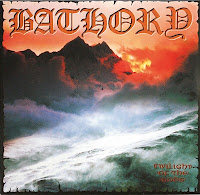 Over the Christian skulls, and through the waves, to Grandfather Odin's house we go. Twilight of the Gods, the 6th Bathory full length, would see the Swedes' transition to full-on Viking folk metal completed, and all within the span of a year since Hammerheart. Not that this would be the last evolutionary stage for Quorthon, who will continue to place the band on divergent paths through the mid 90s, but I don't think anyone could question that a good number of his albums from the Blood on Ice era and beyond felt like reiterations of the concepts and atmospheres he originally explored on the Viking 'trilogy' of Blood Fire Death, Hammerheart and this Twilight of the Gods.

This chapter is by far the most accessible in all of Bathory's history, and that's due to the high levels of friendlier rock polish in both production and composition, plus Quorthon's decision to focus almost exclusively on a cleaner vocal tone. Personally, I was saddened at this fact when I first purchased the CD, because I did rather admire the coat of grit he had applied to its predecessors, since all but abandoning the snarling and rasping pandemonium of the early albums. As I've mentioned, I find the man's pure singing voice to be inconsistent at best, as he was never blessed with the broadest range and seems to often stumble over his accent, but even at its worst there is a particular character to his floppy, cutting tone that is easily distinguishable from anyone else (sort of like the charm one might find in 'Engrish' bands, though this is not of grammar but delivery). He can hit a certain thread of melody in "Twilight of the Gods" or the soaring symphonic anthem "Hammerheart" which proves he's no hack, but there are a number of passages throughout this album, like the slovenly verses of "To Enter Your Mountain" in which further refinement and editing should have been mandated.

Musically, the focus is all on slick, clean and catchy chorus sequences and simple flowing rock chords, supported by choirs not unlike those found on Hammerheart. Bathory was no initiate to the use of the acoustic guitar, but here it was most heavily implemented as a base component of the musical landscape. It's nearly everywhere, and tracks like "Under the Runes" and "Blood and Iron" wouldn't be the same without the brooding, folksy undercurrent it creates. So much of the album is slow that it reminds me of a Viking Pink Floyd. Perhaps not so psychedelic, unless you're a raven or six-legged horse, but certainly as airy and atmospheric as that comparison would imply, with an assured, steady flow to the music that centers heavily on the simplicity of the rock chords and the flow of the vocal arrangements. The aim was to appear glorious, and even though this is far from a personal favorite in the Bathory repertoire, that end result is not one I could ever deny.

I almost wish that the use of voices here had been restricted to the choir sequences, though, like the drudging harmony used in "Blood and Iron", because when Quorthon breaks away for the lead vocal lines they often feel relatively shabby and off-kilter. With Hammerheart, I felt as if the man were riding some squall on a dragon ship and beseeching Ægir to let he and the crew pass the towering torrents around them, but here his presence seems to break up the smooth flume of the musical procession and there are cases like "Through Blood by Thunder" where he just feels like an emo suffering from a hernia. I found my earlier exposures to the album grating at best, especially in such spots as this, but through the years I've at least learned to tune them out and just focus on the underlying music, which, while rarely exemplary, at least serves for positive background noise to atavistic ruminescence or dorkier pondering. Though interestingly enough, there's a slightly contemporary slant to the lyrics (in particular the title track).

Ultimately, it's a good album, but not a showcase of Bathory at peak performance. I do like the meandering, fell majesty and tribal power of the drums, the constant kneading of the acoustics into the roiling, simplified chord structures and the sobering choirs, but at times I feel as if they're all being conducted by a drunkard. Still, this would be the safest to share with your dad, uncles and granddads over a mead. But your mom will still hate it. I can recall that this was supposed to be one of several swan songs for the band. It's solemn disposition certainly reflects that finality, and I'm sure that there are a great many Bathory fans who wish it had been the case, judging by the divisive reactions towards its successors, but it's not as if all the ensuing efforts were total refuse. Twilight of the Gods should be judged as the album which plied the safest waters in terms of a general audience, but it was quite risky at the time for the more specialized metal audience who at the time might have been more desiring of heaps of entrails and Satan. But then, they had Deicide (and many more) to whet their carnal appetites.

Posted by autothrall at 7:42 AM