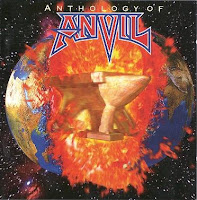 It had to happen sooner or later, and I'm surprised it took as long as it did, but at last, the very first official Anvil compilation arrived through Metal Blade, their former imprint through the later 80s. I mean, we all know just how much anticipation the band's audience had built up to hear songs that they already owned, right? Oh wait, no, because the only fans that would snap up such a release as this would be those interested in rarities, unheard live cuts and previously unreleased recordings that actually justify it's existence. Curiously enough, Anthology of Anvil provides none of these. What it does is grant the purchaser nearly 80 minutes of sloppy seconds, or rather, tracks that are best experienced in their native album environs.

Face it, this was nearly a decade before their documentary flick thrust them briefly into the spotlight they had only glimpsed at in the earlier 80s, and the Canadians were in no way a hot commodity. The diehard following was divided between a group of devoted old schoolers who already own the Anvil albums, and perhaps a small handful of newcomers who were ahead of the curve in that 80s heavy metal nostalgia which has since exploded. There was absolutely no reason to release a collection of redundancies like this one apart from scraping a few bucks. I'll give Metal Blade credit that they've managed to include cuts from each of the band's 9 studio full-lengths to its day, and even one selection from the live record. Perhaps some snappy licensing maneuvers were involved there, but in the end the result is the same: repackaged content with no clear incentive for a purchase.

Yeah, they include a lot of the band's best songs: "Metal on Metal", "Blood on the Ice", "School Love", "Forged in Fire (live)", "Mothra", "Winged Assassins" and "March of the Crabs" all deserve their slots on this roster. For the newer stuff, not so much. "Speed of Sound" and "Smokin' Green" I can see fitting here, but then there are a few others like "Bushpig" and "Doctor Kevorkian" that don't really belong (even if the latter had a video). You're looking at an average of about 2 tracks per album, so it might even come off as a decent sampler: if it were free or at some heavily discounted price (like a dollar). At the full price of a record? Fuck no. An absolute, el Gigante fuck no. With the advent of the internet, I'm sure you can stream just about every song on this disc somewhere...you even could in 2000. There's your sampler. For anyone who actually cares about this band, buy their albums on tour. Or some merch. Give them something of value to them, and get something in return. Track down the old 80s vinyls. I have a few of them, and they're sweet. Anthology of Anvil is just another coin-spinning emblem of commercial emptiness, a void to avoid.