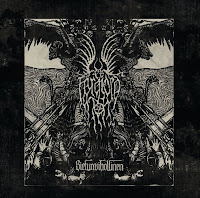 Finland's got a long history of churning out some of the coldest tones in all of black metal, from Horna to a great many younger bands, several of which populate the Hammer of Hate imprint. In recent years, acts like Anguished and Vitsaus have carried the torch for this aesthetic and label, but there's another wolf in the woods with one of the most raw, natural skill sets you're likely to hear in all the genre: Förgjord (aka 'Destroyed'). These Finns have quite a lengthy history behind them, forming in the middle of the 90s, but really only becoming productive into the 21st century, with a number of demos and their 2008 debut Ajasta Ikuisuuteen. I remember that album, but only with a passing appreciation...a negligence I'm not likely to repeat with its superior successor, Sielunvihollinen.

This is basically one of the most frost-tinted, grimy black metal sounds you're going to hear in the coming year, though not lacking for variation. Traditional tremolo melodies are alternated with thrashing palm mute sequences and cruising punk-based proto-black chords that borrow from the Norwegian greats Darkthrone in style and substance. The rasped and forked mantras of Prokrustes Thanatos casts Finnish incantations and evil through the sub-zero night of the stripped down atmosphere, and the whole thing sounds like the band were rehearsing outdoors. I do find that the vocals, while effective enough, are often so loud that it serves to the detriment of the backing music. Not so much that you can't make out most of the riffs, but noticeably unbalanced. Otherwise, tracks like "Musta Lintu" and "Viimeinen Myrsky" shifting between ritual, repulsive grooves and blasted abandon, drawing up comparisons to Deathcrush, Ablaze in the Northern Sky and some of the more malicious, primal Horna material.

But there is one other side to Förgjord which is not all that common upon this ultra blackened field, and that is their abundant use of acoustics. Not only in the intro "Suokaste", which also features a flute line, but also dispersed through the opening sequences of "Sudeksi Syntynyt" and "Viimeinen Myrksky". The patterns are quite simple, but the use or organs or other atmospheric embellishments creates a major contrast with the rigid pummeling of the distorted riffs, and thus the album feels a lot more dynamic than others of its niche. That's not to say that Sielunvihollinen is by any means an exemplary entry into this genre, for it suckles the same sources as so many others and rarely deviates from the riffing familiarity of old, but it's quite an engaging and unpleasant sliver of wintry chill nonetheless. Even at its most tranquil, there is no warmth. Only misery and spite; icy tongues that lick the listener's ears while injecting poison into his soul. Unforgiving.