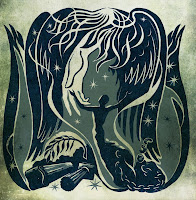 It might be more appropriate to think of Aus Der Transzendenz's debut Breed of a Dying Sun as an aural archway into the windswept depths of Pandemonium than a run of the mill black metal record. So intent is it on providing an airy, overwhelming evisceration of the audience's imagination and senses that it often sidetracks the core fundamentals of standout, memorable riffing intensity and variation to the point that it can come off stubborn and irascible. That's not to say that it never shifts gears as far as its underlying tempos, or that there are no rasps, blast beats and tremolo picked guitar lines in its actual songwriting structure. But the first and foremost component of the recording is the atmosphere. Breed of a Dying Sun has its flaws, yet I could never dispute that it's a torrent of wretched emotions: a flood given flesh.

The Austrian project, whose roster remains an enigma at this point in time, lays into the listener immediately with a wall of dissonance and feedback comprised of tortured, open rasping and streaming chords that quickly congest over the blasted undertow. At times it had me thinking of the heavier, guitar driven passages of The Angelic Process, due to the warmer, melodic tinge in the slower paced finale "The Secret Revealed". Or perhaps the cold floes of New Yorkers The Howling Wind, sort of an expansive post-rock aesthetic compressed into the harrowing frame of forceful, traditional black metal as experienced through "A Pathway to Rebirth" or the most frenzied track, "A Dream of Ghosts". There's not a lot of subtlety in these last few, the chords comprise a tortured vortex of light and shadow while the vocals howl across like their crest like desperate undead wolves, but for aural shock alone I feel the band stays pretty true to its modus operandi.

There is a sparse use of cleaner vocals here, especially in the last track "The Secret Revealed", which none would argue is its most beautiful moment, a dreamy if simple sequence of melodic, cleaner ringing notes applied to drifting, faster textures that feel more like a shoegazing experience than black metal. But the band is always quick to remind you that you stand on the precipice as the massive rasps return, and they permeate a rather night, if monotonous bridge sequence where the tones and pitch of the guitars become darker, almost as if the day were about to turn its back on the album as its closure. Alas, while I can appreciate the aesthetic intent to evolve beyond the borders of its genre's conventions, I did not get as much out of the actual music as I'd hope. Many of the riffs steer along predictable courses, rarely compelling enough that they stick out among the many millions that have been written for the style, and often the drums feel a bit cluttered (like the slower breaks in "A Dream of Ghosts"). Breed of a Dying Sun provides a 'rush', and its 33-34 minute brevity ensures that it does not overstay it's welcome. But not a rush I'm apt to take very often.
Verdict: Indifference [6.5/10]