Darkthrone - Sempiternal Past: The Darkthrone Demos (2011) 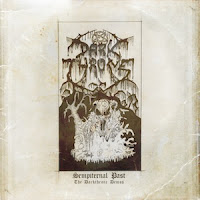 Does the world really need another re-release of the Darkthrone demos? That really all depends on how much of a fanatic one has become for the band, or whether or not one finds particular format more appealing than the previous conditions under which they were issued upon the niche audience. A handful of years ago, in 2008, Peaceville put out the 21st anniversary collection Frostland Tapes which included all the material in a rougher form, on three CDs packed with extras. Even earlier than that, the Preparing for War collection included a number of the demo tracks though in a less sequential, incomplete package. So really, it's hard not to think of Sempiternal Past: The Darkthrone Demos as a bit of a redundancy despite the decision to remaster and restore the material with the best possible quality. Even the cover art has already been used...

However, if one had not previously acquired those earlier compilations, then Sempiternal Past is a great way of gathering the demos in one place in their proper, chronological order. As hinted, they audio has been better flushed out from the original source tapes here, and so even their most primordial, amateurish compositions like "Forest of Darkness" from the 1988 Land of Frost demo feels more brazen and fulfilling with the filtered, odd vocals and drudging, primitive riffs. I feel that personally the drums sound a little better, and even the guitars, though I've never been a huge proponent for these earlier tapes as they offered nothing more than groundwork for the Norwegians to establish the later, death metal style of Soulside Journey. There's also the fact that, well, do compositions as prehistoric as these of Land of Frost or A New Dimension even NEED to be brushed up? Doesn't the very base nature of their sound on the prior collections or even just tracking down filthy digital versions sort of lend to their charm? I don't necessarily see the point of polishing a turd if the very charm of it was the stench to begin with...

But then, on the other hand, Sempiternal Past feels like the 'de facto' format with which to experience the material. Whether you've got the vinyls or the CD set, the demos are carefully laid out in order without arbitrary interference from rehearsals or other bits. There are bonus tracks included after the four demos, including the two 1989 live performances that were aired on television in Oslo ("Soria Moria Slott" and "Eon/Thulcandra" medley). But then, anyone with the special edition of Preparing for War already experienced them. Probably the best part of Semptineral Reign is having the track "God of Disturbance and Friction" for your collection, but then this is a pretty average piece with standard Celtic Frost inspired, mid-paced chords and rasping that isn't among their better written, or more sinister executions.

Ultimately, with two previous collections available with three discs each, I didn't come away from this feeling as if I'd gotten anything new or important. None of the demo material is capable of superceding the album incarnations (where applicable), and neither does the skimpy bonus material impress. If you don't already have the Frostland Tapes, and you're looking to complete your Darkthrone collection or replace whatever dubs or rips you have of the old demos, then this is an acceptable solution (and maybe bump my rating up a notch or two). It's not like Fenriz, Culto and Peaceville just regurgitated this to turn a buck, some effort was used in refinishing the levels of the mix and giving you a version they were happy with you hearing. But I didn't end up enjoying these particular tunes more than past exposures, and thus my preference remains with Preparing for War as it had that sweet DVD, or especially Frostland for that added instrumental disc. If you're ever faced with the choice, just be forewarned what you'll be getting in each case. I'm sure the double vinyl will at least prove collectible since that format is all the rage right now.
Verdict: Indifference [5.5/10]