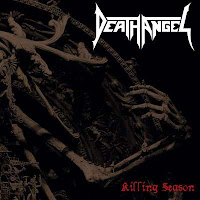 I think it's a good thing that I've experienced Death Angel's latest album, Relentless Retribution before revisiting their post reunion backlog, because at least that album gives me some hope that the Californians might once again reach the memorable standards that they set so early on. Even if their modern sound is quite different than The Ultra-Violence, I'll be happy as long as the songs conjure up some genuine excitement and impressive riffing. Like The Art of Dying before it, their 2008 effort Killing Season was yet another effort to which I could only extend a lukewarm reaction, a modern and turgid brand of thrash/groove metal which, if not for a few of Mark Osegueda's vocal lines and the logo on the album cover, I might have mistaken for an entirely different band...

While Killing Season felt more angry and consistent than their long anticipated 4th 'comeback' album, it generated a whole set of problems all its own. Or, if not 'problems', reasons that it failed to hit the bar raised by their 80s albums. Instead of that filthy speed metal momentum that once coursed through their compositions, this is largely a groove based album, with a lot of riffing that reminds one of Pantera, or Machine Head, or other 90s stewards of tough guy slugfest metal that evolved straight from the thrash of the previous decade. The guitars focus heavily on thick palm muting and rock grooves, often like a less stoner post-Blind Corrosion of Conformity. There are a decent share of Bay Area chugging sequences that recall Exodus or Metallica, as in the track "Dethroned", but I found the slower grooves far less despotic and threatening than, say "Voracious Souls", and the faster, driving note progressions to leave much to be desired. But probably the most obvious comparison here would be to the 'modern' Anthrax sound circa The Greater of Two Evils or We've Come for You All. When Mark's spitting out those mid-ranged lines, he has a lot of bite to his voice sort of like a more acidic John Bush, and the pummeling breadth of the guitar tone is not unlike Ian and Caggiano.

Not really my thing, not at all. However, like The Art of Dying, I would be remiss to not admit that an obvious effort was placed in the songwriting here. Unlike that album, where you might hear Death Angel fly off the handle and bust out some grunge inflected track, most of the contents of Killing Season follow a logical, fluid architecture that seems like the band had more of a commitment to its style. They come out fighting in "Lord of Hate" and never really let up as they hammer out material like "Sonic Beatdown" or "The Noose". There's a bit of an emotional side conjured through the acoustic guitars or Osegueda's carefully constructed chorus lines. The lead work, melodies and effects that Cavestany and Aguilar dispense here are generally quite creative, like the octave chords carving out "Lord of Hate" or the funky filtering that introduces "The Noose" or "God vs. God", but I felt like the rhythm guitar riffing left a lot to be desire. Whether I'm hearing the pedestrian if somewhat intense chugging of "Sonic Beatdown" or the voluptuous rock curves of the "Steal the Crown" chorus, it never seems to stick with me.

If an album like this had come out around 1993-1994 when A Vulgar Display of Power was in massive rotation, I think it would have done quite well and felt pretty fresh, a more aggressive successor to Act III. But not something with the killer chorus hooks and attitude that would endure down through the decades after that. As it stands, Killing Season suffers from a lot of that same, banal writing that the recent Onslaught reunion or Rob Dukes fronted Exodus records seem to phone in. The production is dense and potent, and in particular I think they did a decent job arranging the vocals here and ensuring that something interesting was going on with the guitars even when the bottom end riffing was tepid and predictable. But the underwhelming groove influences, and the lame, 'you go girl' affirmation lyrics in songs like "Sonic Beatdown" and "Steal the Crown" drag it down considerably, and I wouldn't be caught dead singing any of this in the shower, where I might once have lathered up while howling "KILL...AS ONE!" I'd rank this a fraction higher than The Art of Dying, but nothing special.
Verdict: Indifference [6.25/10] (sleeps with his gun, his surrogate wife)