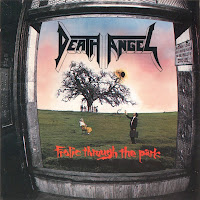 The irony of such a killer debut album as The Ultra-Violence is the enormous pressure placed on its successor, a pressure that Death Angel was clearly feeling when strapping together its sophomore Frolic Through the Park for Restless Records. By any standard, this could be considered a more 'accessible' followup to the scathing we received in 1987, though it's far from an abandonment of the savage speed/thrash riffing that the band brought to bear there. If anything, Frolic feels like the musicians, still quite young compared to their many burgeoning Californian contemporaries, were issuing 'feelers' to round out and mature their style, and this manifest in a funkier hard rock influence in a handful of the tracks, plus a cleaner tone coursing through its bloodline, marginally friendlier than its elder sibling.

This was the same line-up as The Ultra-Violence, and you can certainly sense that quintet's performance as a unit was tighter and more comfortable, but I wouldn't say that all of its components were quite so impressive. The guitars still add a lot of interesting flair with a mix of more generic, speed metal palm muting and some clinical, melodic architecture like we find below the final lead of "3rd Floor" or the gallant tint under the surge of the "Shores of Sin" chorus. As for their central rhythm riff set, it's still strong enough to appear timeless in many places on the disc, though there's nothing here quite so immortal as a "Voracious Souls" or "Evil Priest" or, really, most of the debut. Andy Galeon gets a great workout here, with an increased use of his fills alongside the myriad tempo changes that flit about the tracks, a lot of which hover between the 5-7 minute mark and thus get ample space to adventure. Dennis Pepa is also solid, though I'm not a big fan of the funkier bass lines which contribute to some of the weaker tunes here.

As for Osegueda, I felt that he might have often been too pronounced in the mix on this album. There are certainly points like the choruses to "Why You Do This?" or "Shores of Sin" where he excels, and these are arguably some of the catchiest lines he's committed in all the Death Angel legacy, but some of his shrieks throughout the album sound a fraction too 'girly', and there are cuts like the drudging "Confused" where he's all over the place, and I'm not into the nasal, conversational frankness of the chorus alternated with the harsher bite that I associate him with. That said, he's still got a rather unique presence that I can't recall hearing much elsewhere if we aren't to count Belladonna as his most psychotic moments.

Song-wise, I feel that Frolic Through the Park works best when its honoring its lineage from the first album, in other words at its most abusive and aggressive peaks. Tracks like "Road Mutants" and "Guilty of Innocence" certainly stir the circulation with manic headbanging, while "Devil's Metal" and "3rd Floor" at least feature some prominent, compelling guitar work that feels fresh over 20 years later. The band's cover of "Cold Gin" from the s/t KISS debut is nothing to scoff at, though I admit towards a little bias there as it's hands down one of my favorite rock songs of the 70s. On the other hand, there are a few selections here that seriously dampen my potential appreciation of the album due to their lyrical silliness and the elements of funk rock that feel like the band were trying to dust off their hereditary bell bottoms and channel a bit of Hendrix into the hostile environment, which just doesn't work for me...

I wouldn't brand the songs 'funk metal' whatsoever, and bands like the goofy Infectious Grooves were still on the horizon, but we had a few similar cases around this time like San Francisco potentials Mordred, whose debut Fool's Game where they covered a Rick James track and one of their own concoctions ("Every Day's a Holiday") certainly fit that bill. But I think there's undoubtedly some psychedelic hippy groove fueling "Bored", with its plucky staccato riffing and bluesy trills that explode into the chorus, and those verses clearly feature some disco funk hustling over Osegueda's whiny vocals and the ultimately underwhelming chorus of 'I'm bored', which...sounds like he IS bored. Funny enough, this was the video released for the album and generated quite a lot of buzz for them, certainly more than what the band culled out of The Ultra-Violence. But people are funny that way. These days, I find the guitars here efficaciously groovy, but the lyrics and chorus quite sodden and lame.

Even worse: "Open Up". This song 'opens up' with a gang shout and then busts into some MC5 or Hendrix groove with lame vocals that alternate between the nasal whining and an attempt to sound all emotional and hard rock over some funky bullshit. And if the music and delivery were not bad enough, the lyrics are fucking laughable. This is another of the 'celebrate nonconformity' anthems that stunk up the thrash scene in the 80s/90s, as if the general public or the metal audience, who were already 'open minded' enough to dip below the mainstream needed some preaching to over their choice in lifestyle or music. Similar to "31 Flavors" by Sacred Reich. It comes off incredibly dated, trite and not even funny to read lyrics like these:

or the amazingly resonant chorus...

It's fucking tragic, really, and a major symptom of why this album suffers in the wake of the debut. Gone are the songs about evil preachers and cults and sluts and all that other greatness of The Ultra-Violence, and in their place wimpy musings about life in general, as if penned by a 12 year old staring at the blackboard in his Social Studies class. The prose in "Bored", "Confused", "Why You Do This", and "3rd Floor" is all quite miserable, and even the anti-Christian finale "Mind Rape" manages to come across as pedestrian and underwhelming. It's not that the points being made in the songs aren't important or relevant, they're just handled in the most tacky of ways and ironically makes Frolic Through the Park seem even more childish than an album they recorded when they were basically kids...hell, I was essentially AT THIS AGE when the record came out and I still found it stupid even then.

There are other weak spots here, for example I don't love the punk riffing in "Why You Do This" and feel that about two minutes or more should have been lopped from "Confused", but really it's the shadow of the lyrics and how they translate into Mark's performance that renders the album so disappointing. Had the music itself been utterly intense and unforgettable, then I might be more willing to let these slide. Gods know there are albums I love with crappy lyrics, but in those cases the music is more than just compensation, or the delivery so brutal that you might not even notice. The funk-inflected tunes don't really help either. I can recall about 3-6 months in high school where everyone was so jazzed up over Primus and Red Hot Chili Peppers that it seemed like a great idea, but very few bands were ever able to pull this off for any duration. Thankfully it would never fully consume Death Angel's sound. There are further hints of it on Act III, and in their other projects, but the post-reunion records seem to have flagged it as a generally bad idea.

In the end, Frolic Through the Park is not an album bereft of some character, and there are a dozen or so decent riffs worth hearing once, but where its predecessor leaves a crater in your heart, so radioactive with faux Satanic fallout that nothing can grow there for years, this sophomore just sort of skirts around the crater's edge, selling lemonade and balloons to tourists who showed up that they might witness some REAL destruction.