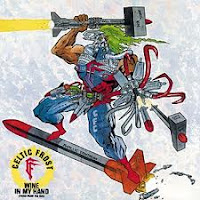 Wine in My Hand (Third from the Sun) is just another of the myriad 'who gives a shit' singles or EPs that have always been released near or alongside full-length albums to scam a few more bucks off a band's audience. The real attraction here is the non-album cut "A Descent to Babylon (Babylon Asleep)" which never made it onto the original pressing of Vanity/Nemesis, but the titular video tune and the cover of David Bowie's "Heroes" have no more impact than anywhere else. Coupled with the gaudy, terrible and unrelated choice in comic book cover art which looks like a mash-up of the Mighty Thor and.... well, SOMETHING riding a missile, it's value is exponentially lessened and even more questionable than the band's Tragic Serenades EP circa 1986.

Was this 'fan art', submitted for the EP? Were they just smoking crack-cocaine? I'm willing to bet that both might have been involved. Anyway, "Descend to Babylon (Babylon Asleep)" is not a track to entirely scoff at. There's a nice thrashing mute groove in the verse and a couple slower passages over which the lead trills, but the rhythm guitar beneath the second fragment of the solo seems like a knockoff of several other mid-paced riffs from the full-length. It's pure Celtic Frost, with a mix of Warrior's gruff verbal constipation and a few of the Cold Lake whining lines, but in general I don't find it to be so memorable or interesting as several of its neighbors over on Vanity/Nemesis, and I can sympathize with the decision to leave it off. Otherwise, the other two tracks are identical to the full-length, and thus completely redundant, worthless to me here.

What's makes this even more of an insignificant release is the fact that "Descend to Babylon" has been re-issued twice, through both the Parched With Thirst Am I And Dying compilation (in 1992) and the 1999 Vanity/Nemesis reissue. So, for anyone (and really, EVERYONE) who has since gotten their hands on either, owning the EP is a real non issue. Collectors might want the CD or vinyl editions for completion's sake, but I doubt even they want to stare at it very long, lest it cause cancers to grow behind their eyeballs.
Verdict: Epic Fail [1.5/10]