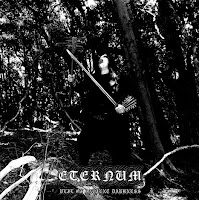 Eternum proves yet another reason why Australia is leading the pack when it comes to this latest generation of atmospheric black metal, traditionally based but dowsed in reverb and resonance that gives it some legs to stand on. Striborg and Drowning the Light are two of the more prolific acts in this scene, but they've been joined by a host of newcomers like Atra, Temple Nightside, and Moon who all exhibit a great grasp of immersion. I was first exposed to the duo of Nightwolf and Azgorh (both also involved with Drowning the Light themselves) on the Oath of Defiance split with Finnentum of Finland, and thought they held their own alongside another of the mighty Shatraug's impressive projects. This full-length debut could be viewed as the logical extension of that dreamlike, desolate and dense material, and it's a clear means of escape for the darkling imagination.

Don't be misled by the cover image, because Veil of Ancient Darkness is a lot more textured and emotionally draining than the traditional 'forest pose' might normally imply. The shining wall of distortion promoted through the guitar is a staple for several of the bands in this microcosm, hailing back to the formative tones used on earlier Burzum recordings like Filosofem, only its heavily drowned in an airy polish and backing synths and choirs that creates this rich flood of suffering to coincide with Azgorh's harsh, full and echoed rasping. There are not a lot of subtle threads being woven through the music, just the clang of the percussion and the doomed, majestic certainty of the chords and tremolo melodies, but often you'll hear a deep male choir in the background (as in the opener "Tyrannos Regnare in Aeternum") or some other device that keeps the music fresh and leaden with appropriate grief. Eternum is not a one track, pony, though and mid paced cruisers like "Tyrannos..." and "Shores of the Impaled" are offset by the sheer savagery of "Dark Unholy Empire" and "The Iron Winter", or the resilient acoustic interludes like "Ghosts of Warriors in the Dead of Night" or "Burial of Heroes".

I place a great deal of value on this genre's ability to get me out of my current headspace and into some bleak approximation of antiquity, a sojourn Veils of Ancient Darkness is well capable of granting. Favorites included the late 80s Bathory-like momentum of "As Black Smoke Covers the Sun" and the speed picked, lush acoustics of the finale "As the Ravens Watch the Battle", but there wasn't a break on the whole album in terms of its consistent aesthetics of fell, tangible loss and glory. It's not the most 'malevolent' sound, granted. There is no real sense that you're being confined and tortured in a crypt (as with DtL's Catacombs of Blood), but more of this brazen openness, as if the Hessian who has just emerged from the woodland on its cover was about to conquer and immolate some local village, raising morningstar spikes to the sky as the smoke from the cottage fires drifts out towards the sea. And that's not a bad thing. In fact, it's this salient swath of demeanor which so engraves the album's warrior conscience onto the listener, and while it's not necessarily perfect or novel, it's a solid recommendation for fans of the members' other projects, or atmospheric black metal in general.